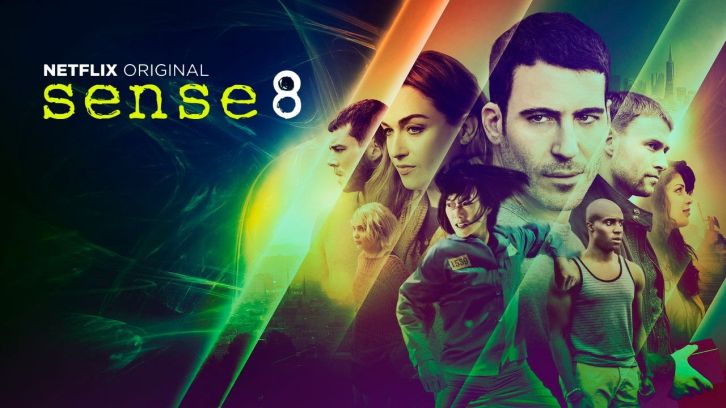 I just (well, yesterday) finished watching all the episodes available of the Netflix series Sense8.

The show is about eight people who are "senesate" (get it?) in that they can telepathically connect with the other people in their "cluster." Not only can they hear each other, they can help each other out. In one episode in the first season, a member of their cluster is running from the cops. She jumps in a car and then says "What am I doing? I can't drive." But one of the other people in her cluster is a bus driver, so he drives for her, despite that she's in San Francisco and he's in Nairobi, Kenya. It sounds preposterous but it's so well done you willingly suspend disbelief.

Sense8 is probably the best show on Netflix that you shouldn't watch. The production values are feature film quality. There is no point where you think the production compromised to save money or time. It is filmed on location around the world in places such as Iceland, India, and Korea. Everything looks and feels authentic. The bad guys (an evil corporation--of course--that seems to produce or sell nothing so I don't know where it gets its money) are bad along with people you may or not be able to trust. The eight main characters are diverse in their personalities and beliefs. But when one needs help, they all come to the rescue. The one unbelievable thing is the hacking skills of the woman in San Francisco (and her friends) who seem to be able to do anything with computers. Also, one of the characters changed actors in the second season and that was a bit jarring. I didn't like the second actor as much as the first. But probably just because he was the first one.

It was produced and often directed by the Wachowski brothers sisters who made the Matrix movies so you know it's going to have attention to detail and be a bit over the top. And it was.

To watch Sense8 you'd best not be easily offended. There are two gay couples, one male-male and one with two females. The violence is graphic and the sex (including gay sex) is near pornographic. But none of it feels gratuitous. The language alone would have earned it an "R" rating if it were a movie.

But you shouldn't watch Sense8. Why? Because after two seasons it was canceled by Netflix, leaving you hanging and with a lot of things unexplained. You'll get involved in these people's lives and then be abandoned by Netflix. It's is a great show, but unless Netflix changes its mind and renews it, don't watch it. Unless you want your heart broken.

It was probably its quality that doomed Sense8. It was very expensive to produce, I've read, and didn't attract enough eyeballs. So Netflix cut its losses and canceled it.

UPDATE: I just saw on the Sense8 Facebook page that there will be a 2-hour special, probably to wrap things up, on Netflix next year. So go ahead and watch it, now.
Posted by S. Evan Townsend at 11:44 AM