Today marks 100 days until University of Washington Huskies football starts with a home game against Montana. No time has been set yet. Montana is an FCS school, so it should be a nice warmup win for the Dawgs. But after that they play Michigan in Michigan and that will be a tough game.

After last season, I need football. The Huskies played four games total last year, losing one (for some reason, we can't beat Stanford except in 2016). I was so desperate for some football I ended up watching the Seattle Seahawks more than I normally would.

I went to college (a lot) at the University of Washington but when I really got into Husky football is when I went to a few games. Seventy-thousand people yelling for the same thing does something to the psyche. I discussed that in detail before.

It's interesting. When I was a kid I hated sports of all kinds. I would turn on the TV to watch something I wanted to watch on one of the two channels we had, and there would be sports running long. That's when I learned that the last two minutes in football can take forever. Really made me angry.

Of course I still hate baseball, basketball, and soccer.

But Husky football, I love.

What sports are you looking forward to? Or are you not into sports at all? Let me know in the comments below.

What Five Things Influenced Me to Be a Writer...

I tell people I started writing when I was 12. This is pretty much true. But I was always making up stories in my head, usually involving what I built out of Legos.

My sister, who is four years older than I, brought home her touch type instruction book from high school. I used it, and her typewriter, to teach myself how to type. I then started writing. But what influenced me to become a writer?

1) Television: As a kid I watched way too much television. But, in a way, that's where I learned to tell a story.

2) Star Trek (the original series): When my local television station started running Star Trek reruns in the afternoon just after I got home from High School, I watched religiously. There were two episodes they didn't show, however, "What are Little Girls Made Of?" and the last episode, "Turnabout Intruder." I had to see those later. (I think the television in my small, very conservative area of Idaho found them unacceptable.) But Star Trek is what made me a science fiction writer.

3) Books: What writer wasn't influence by the books he read. And I read, of course, science fiction books.

4) Robert Heinlein: Speaking of books. In an about four-year period from 1986 to 1990, I read every Robert Heinlein book in print. And I love most of them (he had a couple of early clunkers like his first juvenile with Nazis on the Moon). But man, could he write. And I wanted to write like him.

5) Star Wars: In the sixties and seventies, science fiction tended to be boring and depressing or both. Then the original Star Wars movie came along (and its two sequels) and I realized science fiction could be fun.

Those five things are the primary influences that made me a writer. Well, that and I've always told stories.

I recently watched the movie Bowfinger. I'm not exactly sure why or how I missed this movie when it first came out in 1999. Maybe because Rotten Tomatoes only gave it a 68%. But it is hilarious.

Steve Martin and Eddie Murphy, what could go wrong?

The comedy comes when Murphy's star character, Kit Ramsey, turns down Bowfinger's movie but Bowfinger decides to make the movie anyway, with Ramsey in it. That's when the fun begins.

Heather Graham plays a sweet (or is she) girl trying for stardom and Robert Downey Jr. is a big Hollywood producer. Christine Baranski plays an actress who is so into her trade, she can't see what's happening.

I really enjoyed this movie. Two thumb up!

Have you seen Bowfinger? What did you think? Let me know in the comments below.

Do We All See the Same Color 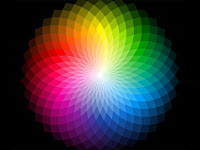 This is something I've been wondering since I was a kid (along with "why do I exist?" "why do I see out of these eyes?).

Now, I find this unlikely. The color of light is determined by its wavelength because light is electromagnetic radiation (just like radio waves and infrared and microwaves you use to pop popcorn). So when electromagnetic radiation (EMR) of a certain frequency hits your retina, it sends a signal to your brain saying "this is this color of light." But does your brain interpret that input the same as my brain.

I suppose someday if we can see what others see though technology, we might confirm that red is red for everyone. Until then, this is pure speculation.

Do you think everyone sees the same colors? Or do you think I'm nuts? Let me know in the comments below.

UPDATE: I just read an article that says this is a common dorm-room discussion. I never stayed in the dorms when I was in college, so I guess I never had this discussion.