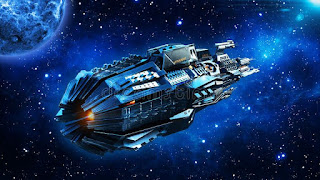 Einstein tells us we can't go faster than the speed of light which is 299,792,458 meters per second in SI units. That's over 670 million miles per hour.

In Newtonian physics, this is because kinetic energy increases as the square of the velocity per this formula:

And at one-tenth the speed of light, it would require 44 years (about) to reach the nearest star (although for people on the ship would the time would 43.78 years due to time dilation caused by relativity). That is the Alpha Centauri star system. And there's no reason to think there are inhabitable planets in that star system nor alien life.

This is a conundrum for science fiction writers such as myself. In order to have our heroes and heroines have adventures on other planets and in other star systems, we need faster than light (FTL) travel.

In my novel Rock Killer, there is no FTL and the entire novel takes place in our solar system.

In my novel Forces, the humans don't have FTL but the aliens (some of which are evil) do.

But in my Treasures of Space series (Treasure of the Black Hole, Treasure of the Pirate Planet, and Treasure of the Rogue Moon), there is FTL travel. So we meet lots of alien species, go to lots of planets, and have a lot of fun. I stole "hyperspace" from other authors (and Star Wars). But coming up with an original FTL system is hard. In Forces, the aliens move interdimensionally and can travel between star systems in a moment.

So science fiction writers need FTL. Or they will be pretty much stuck in the solar system.

Larry Niven in his Known Space series of books and stories, had humans using slower than light bussard ram jets to colonize space. But it took a loooong time. (Then they were sold the secret to the "hypercore" by an alien species.)

But FTL is a mainstay of science fiction. And we're going to have to deal with that until and unless someone invents an FTL drive. Either that or you're stuck in the solar system or taking a long long time to get anywhere.
Posted by S. Evan Townsend at 6:00 AM No comments: 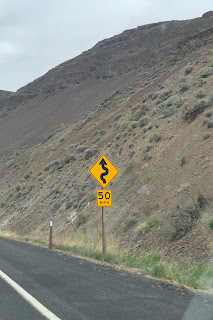 I like curvy roads. As long as they aren't too curvy. Just curvy enough to present a challenge to drive them fast, not so tight of curves you have to take them at 25 mph.

Where I live there aren't a lot of curvy roads. The land is pretty flat so the roads tend to be straight. Now straight roads have their uses (speed runs) and it was one such road where I got my Corvette up to 165 mph and my Audi up to 130 mph.  But curves are a challenge; a fun challenge.

Back when I drove on the racetrack, it was curvy and it was always a challenge to take the fastest path, or "line," through each corner. On public roads you can't do that unless you have clear sight lines and can see down the road because you don't want to hit an oncoming car head on as you drift into their lane.

So it's, in a way, even more challenging on public roads. There's a place in western Montana where Interstate 90 gets curvy and it is fun to drive. And the speed limit was 75 last I drove it. It might be 80 now. Too bad I don't have an excuse to go to Montana.

It takes knowing your car to drive a curvy road. You need to know its limits so you don't exceed them. And if you're not sure, go slower then speed up. Approach the limit from the bottom. I learned that on the race track.

Curves are so much more fun than straights (unless you're doing triple digits) and I love driving them. How do you feel about curvy roads? Enjoy them or hate them. Let me know in the comments below.

As of today I've been in lock down for 55 days. That's almost two months. I haven't been anywhere other than my house and in my car. Last Saturday I did put gas in my car. That's the only time I've been outside the house or the car for 55 days.

I'm sleeping a lot lately. I'm wondering if it's depression/boredom. If I don't sleep 12 hours, I sleep for six. That might be anxiety (although I'm not as worried about dying as I was at the beginning of this).

Yes, I'm a homebody and an introvert. But I would love to go to a restaurant or sit in Starbucks and people watch. Or drive to Spokane and have Korean food. And I'm a bit of a rebel. When I'm told I can't do something, that makes me want to do it more.

I live in Washington State and our governor is taking his own sweet time letting things open up. He has a four-stage plan but says stage one will last "at least" three weeks.

I also desperately need a haircut.

How are you handling the lock down? Or has your state opened up? Let me know in the comments.

When I was a kid, I loved riding my bicycles. I had three growing up. My first was a little red one. The handle broke when I was riding it once. My father welded it back together (or had someone where he worked do it). It still broke at least one more time. I remember the handle breaking and knowing there was little I could do then to prevent a crash, I just waited for it.

Then I had a blue Schwinn Stingray. I rode that bike all over Idaho Falls, Idaho. I was taking swimming lessons in the summer and the pool was on the other side of town. Idaho Falls wasn't a very big city then, but it was big enough. I had to cross the busiest street in town: Boulevard (yes, the street name was "Boulevard"). Frankly, I'm amazed my mother let me do it. But it was a different time. These day a parent wouldn't hesitate to drive their kids to swim lessons.

In sixth grade I got a yellow Schwinn 10-speed. I tended to only use two gears: fifth for speeding up and tenth for "cruising." I must have had strong legs. I'd laugh at people using first gear. Admittedly, where I lived at the time (Blackfoot, Idaho) was pretty flat.

Riding my bike was so fun. When I got to high school, I walked to class because, at a few blocks away, it was "too close" to bother riding. Then I got my driver's license and I hardly rode bikes again.

I remember once I was riding my 10-speed and I wanted to do a U-turn. The street was busy and I did't want to wait, so I turned hard left. I turned so hard the tires skipped a bit and I knew if the tires lost traction and the bike came out from under me, I'd probably get ran over. But I survive (obviously).

Did you have a bike as a kid? Did you love it? Let me know in the comments below.
Posted by S. Evan Townsend at 6:00 AM No comments: