Death to the Emperor

For nearly twenty years, Titus Chumba has either worked for, or hidden from, the emperor of the Core Empire. Now he's become involved in a plot to assassinate the most powerful man in the galaxy. All Titus needs are rare and closely-guarded artifacts. Can he find what he needs and kill the emperor who has tormented him so much for decades? Or will the plot bring Titus to his own final demise?

I swear this is the last book I'm going to write about Titus Chumba! The other books dealing with Chumba are the Chumba of the Intelligence Corps and the Treasures of Space novels.

My next book, Annihilation from Above, will be coming out early next year from World Castle Publishing.

On the equinoxes (spring and fall), the sun is over the equator at its highest point.

It used to kill me as a kid that winter didn't start until late in December. Where I lived we usually got snow early in November. Or often on Halloween.

Now where I live, it's not quite so bad, but we did have below zero (Fahrenheit) temperatures and snow in early December.

Some people try to ascribe mythical qualities to equinoxes and solstices. But they are simply a result of the tilt of Earth's axis.

Starting today, the time of daylight will get longer until the summer solstice in June.

The other day on Twitter I ran across a Robert Heinlein quotation. The quotation was: "Specialization is for insects."

Now, Heinlein is probably my favorite author. I've read everything he's written (almost, there was a recent release I haven't read yet)(After reading his first postmortem release, not sure I want to).

Heinlein had a huge influence on me, not just my writing but my life and politics. I wanted to name one of my kids "Alexander Heinlein Townsend." (My wife put the kybosh on that.)

So, it was hard for me to admit that, in this case, I don't agree with Mr. Heinlein!

The full quote is:

A human being should be able to change a diaper, plan an invasion, butcher a hog, conn a ship, design a building, write a sonnet, balance accounts, build a wall, set a bone, comfort the dying, take orders, give orders, cooperate, act alone, solve equations, analyze a new problem, pitch manure, program a computer, cook a tasty meal, fight efficiently, die gallantly. Specialization is for insects.

And in a way, he has a point. People should be able to do lots of things to live a full life. But that list is... long. I can do maybe half of them. But I don't agree with the last sentence. Specialization has given us the civilization we have today. People specialize in their field and improve our lives. I don't want Elon Musk to be my doctor, for example. That's not his specialization. Doctors specialize and for good reason. Scientists specialize. You wouldn't want a biologist running the James Webb Space Telescope.

So, yes, be able to do a lot of things, but also specialize in your field to become the best you can be in that field.

Do you agree with me or with Robert Heinlein. Let me know in the comments below.

Ladies and gentlemen, herein I am going to review a book, not a novel (I review the novel here).

I bought this book on advice from a friend. It's been a long time since I bought a mass market paperback. But I had no reason to think there would be issues.

As I read the book, I noticed the spine of the cover coming off! 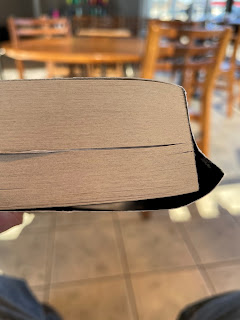 This concerned me. I was worried that the book might just fall apart. But I kept reading... carefully.

By the time I finished the novel, the spine was almost gone from the book itself: 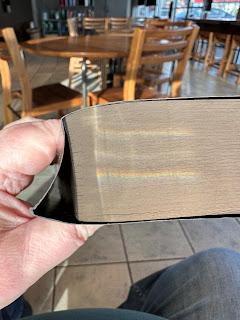 And, in fact, I could open the cover to the point that it was just barely hanging on: 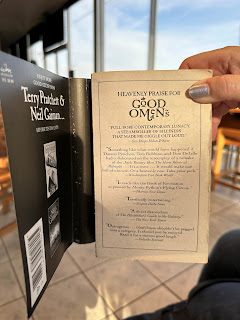 And when I set the book down, it looked like this: 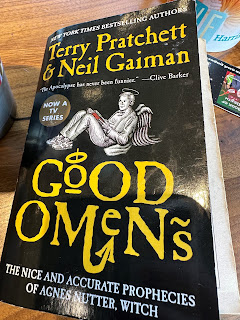 Now, the novel was very good. I enjoyed it a lot. But the book sucked. Maybe they are making all mass market paperback this poorly these days. Maybe I just got a bad one. I don't know. I didn't abuse the book (except once left it in a hot car). I was very gentle with it when I saw it was starting to fall apart.

I don't know if this is typical of mass market paperbacks.

Have you had a similar experience? Let me know in the comments below.

The Huskies' Regular Season is Over

The University of Washington's football team, the Huskies, have ended their regular season. And, unlike last year, it has been a pretty great season.

After the last season, almost the day after the Huskies lost the Apple Cup to the Washington State Cougars, the university's athletic department hired Kalen DeBoer to be head coach. DeBoer was, at the time, the head coach at Fresno State, a smaller school that was known for having a strong offense. And one thing the Huskies needed was a better offense.

I was a bit worried. DeBoer had only been in Fresno one year. Before that he was at a very small school (University of Sioux Falls in South Dakota). How would DeBoer handle the pressures and spotlight of a much bigger school? Would he succeed? Or would it overwhelm him? Spoiler alert: he succeeded.

And this year the Huskies have done the first three. They have won ten regular season games. They beat Oregon in an upset (ruining the Ducks' chance at a playoff spot), and they won the Apple Cup, beating Washington State.
(Because Oregon State beat Oregon, the Huskies are in third place in the Pac-12, with Oregon in fourth place.)

That is amazing for a coach's first year in a new (for him) program. There was a dark time during the season. In week five we lost to Arizona State and in week six we lost to UCLA. Both were away games. It doesn't seem to matter who is the coach or who are the players, we always seem to lose to Arizona State at their stadium and we tend to lose our first away game.

We don't know what bowl game we'll get. There is a possibility we'd get the Rose Bowl and play Ohio State. That would be a tough game. In any case, we should get a good bowl game. We'll have to see if they win it.

The University has extended DeBoer's contract. They did that even before the Apple Cup. And they Huskies should only get better.