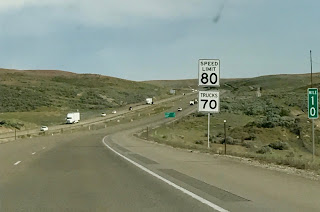 Last week I visited Idaho. I knew Idaho had an 80 mph speed limit on their rural interstate highways. But it's different to know something and to experience it. As soon as I crossed the Snake River which, at that point, demarks the border between Oregon and Idaho, I saw the speed limit sign: 80 mph (70 mph for trucks).

Last year Oregon raised the speed limit on their rural interstates (east of The Dalles) to 70 mph from 65 mph. So the jump in speed limit was only 10 mph. But what a difference those ten miles per hour make. I tacked on my customary 5 mph and set the cruise control for 85.

The first thing I noticed was my car seemed to love it. It cruised along at 85 mph with no drama or fuss. The only time it had problems was where the pavement was grooved and the tires wanted to follow the grooves.

Also, there were perhaps 1/4th of the cars on the road going over the speed limit at all. Quite a few were going under it. I also didn't see any police doing speed enforcement. Perhaps it doesn't pay when so few cars are exceeding the limit.

And not all the trucks were doing 70 mph. But I know that some trucking companies will govern their trucks at 65 or even 60. That meant you had to pay attention because you came up on trucks fast. It was tempting to stay in the left lane but occasionally a vehicle would want to pass me (this happened twice).

Another thing was that sometimes I'll speed up for short periods to pass cars that are going just a little slower than I and I think might pull into the left lane soon (to pass a slower vehicle). It was very easy to find yourself doing 90 mph when you start at 85 mph.

I remember when these same interstate highways were set at 55 mph due to the idiotic National Maximum Speed Limit (NMSL) set by Congress in 1974. In 1986 states could raise the limit to 65 on "rural" interstates. Then in 1994 the NMSL was repealed (by a Republican Congress) and states could once again set their own limits. But from 55 mph to 80 mph is nearly a 50% increase. I remember driving from Boise to Twin Falls and it was a miserable, long drive. At 85 mph it seemed to take nearly no time at all. And the drive was enjoyable because I was challenged, not bored.

I did see one bad accident. But it was where the speed limit was 65. I found a story about it and speed had nothing to do with it but it was caused by driver stupidity.

It made me wish my state (Washington) would raise their speed limit, now 70, to at least 75 or 80. It felt so good to go that fast with little or no worry about getting a ticket.

The one downside was that your gas mileage suffered. But that's a small price to pay.