The Huskies' Regular Season is Over

The University of Washington's football team, the Huskies, have ended their regular season. And, unlike last year, it has been a pretty great season.

After the last season, almost the day after the Huskies lost the Apple Cup to the Washington State Cougars, the university's athletic department hired Kalen DeBoer to be head coach. DeBoer was, at the time, the head coach at Fresno State, a smaller school that was known for having a strong offense. And one thing the Huskies needed was a better offense.

I was a bit worried. DeBoer had only been in Fresno one year. Before that he was at a very small school (University of Sioux Falls in South Dakota). How would DeBoer handle the pressures and spotlight of a much bigger school? Would he succeed? Or would it overwhelm him? Spoiler alert: he succeeded.

And this year the Huskies have done the first three. They have won ten regular season games. They beat Oregon in an upset (ruining the Ducks' chance at a playoff spot), and they won the Apple Cup, beating Washington State.
(Because Oregon State beat Oregon, the Huskies are in third place in the Pac-12, with Oregon in fourth place.)

That is amazing for a coach's first year in a new (for him) program. There was a dark time during the season. In week five we lost to Arizona State and in week six we lost to UCLA. Both were away games. It doesn't seem to matter who is the coach or who are the players, we always seem to lose to Arizona State at their stadium and we tend to lose our first away game.

We don't know what bowl game we'll get. There is a possibility we'd get the Rose Bowl and play Ohio State. That would be a tough game. In any case, we should get a good bowl game. We'll have to see if they win it.

The University has extended DeBoer's contract. They did that even before the Apple Cup. And they Huskies should only get better.

Editing as I Write

Happy Thanksgiving, US!
I've noticed an interesting phenomena with my writing. Usually, when I write a sentence, I have it in my mind what I want to write. That's for every sentence I write, even in an 80,000-word book. But as I write it, often I'll edit it and the sentence comes out better than my original thought.

They say don't edit as you write. But, apparently I do this automatically without thinking about it. And it sort of amazes me that I can do it. (Interestingly, that hasn't happened yet in this blog post.)

This seems to happen most when I'm writing a Facebook post of a Tweet or a text to someone. Probably because I type slower on my phone than on my computer. But it does happen when I'm writing on a fiction work, too.

It's kind of hard to explain. But in the previous sentence, I thought "kinda" and wrote "kind of." But it more than that. It's revising to improve the sentence.

Do you do this kind of editing? Almost automatic while you type or write? Let me know in the comments below.

The other day I was behind a pickup truck at an intersection. The guy didn't have any turn signals (blinkers) on, so I assumed he was going straight. But that's a bad assumption around Central Washington as I'd say at least half the drivers rarely bother with blinkers. And he did, in fact, go straight. But it got me thinking... maybe we need a "straight blinker" or a "straight indicator."

We have turn signals but we have nothing that indicates that a car is going straight other than a lack of turn signals. My thought is, if people knew they had to signal that they were going straight, they might remember to signal they are turning. I'm thinking an amber light in the center on the car. And to activate it,  you push your turn signal stalk forward.

Then I thought more about it. You'd have to remember to do that at every single intersection. If you're going 55 down a country road and pass an intersection, you'd have to hit the "straight blinker." And this would be a pain and most people wouldn't do it. Including maybe... me.

Then I thought it could default to straight unless you turned on a turn signal. But that, too, would probably confuse everyone.

So I changed my mind. No straight indicators.

What do you think of straight indicators? Dumb idea or it might work? Let me know in the comments below.

There's a saying at the racetrack that goes "Money can't buy talent or skill." But it can buy too much car for someone to handle. For instance, the 2023 Corvette Z06 puts out an astonishing 670 horsepower. Frankly, that much power scares me. But I'd still love to drive one.

To be honest, my Corvette Z06 with 505 horsepower scared me until the day I sold it. Especially when I was doing 155 mph on the racetrack.

They used to call the old Porsche 911 Turbo (in the 70s) the "dentist killer." Because dentists (and other people with money) would buy one and not understand how that rear-engined car and the turbo boost works. They would take a corner and stomp on the gas at exit. The turbo would up the horsepower breaking the rear tires loose and the engine would work like a pendulum, and the car would spin and wrap around a tree. This was decades before traction control.

After an accident that killed a teenage girl, South Australia is thinking of requiring mandatory supercar training for those who buy such vehicles. They are also thinking of banning turning off traction control.

This is not a bad idea. A lot of people buy too much car for their talents and skill (the racetrack is a great place to acquire skills). Some training maybe a good thing. I learned quickly not to turn off the traction control in my Corvette. I also never floored the gas unless I had a long straight bit of road ahead of me. That car was scary quick. You could easily get to 100 mph in the time lesser cars took to get to 60.

And that was after I paid to get trained at the racetrack.

What do you think of mandatory supercar training? Is it a good idea or just government overreach? Let me know in the comments below.

The Best EV You Can Buy Now is Not an EV

I'm not 100% against electric vehicles (EVs). There are some problems to solve. One is battery disposal. Maybe someone can come up with a way to make new batteries out of old ones. I don't know.

My biggest issue with EVs is the range. The highest EPA range (which is not realistic for real-world conditions) is the Lucid Air at 520 miles. You can probably cut that by at least half if it's too hot, too cold, too hilly, or just plain not perfect. Plus the Lucid Air sells for $169,000 which is a little more than I want to spend on a car.

But there's a solution to the range problem: have a internal combustion engine (ICE) as a backup. The Chevrolet Volt was such a car, but it's been discontinues. Cars such as the Volt are called "Plug-in Hybrid Electric Vehicles" or PHEVs.

Despite the demise of the Volt, Toyota makes two PHEVs: a plug-in Prius, and a plug-in RAV4 small SUV hybrid. Volvo makes one, the XC60 Recharge. I thought those were the only three until I saw this list from Car and Driver. There are a lot more than I thought from Ford to Ferrari.

The advantage is, you can plug in the car overnight and charge its battery. Toyota claims a 25 miles battery-only range for the Prius and a 42 mile range for the RAV4. The Volvo says its range on electric-only is "up 35 miles." That could get you to work and back, or around town running errands. Then when you need to go on a longer trip, you have the ICE to back you up.

Am I going to buy one of these cars? Not yet. I bet for a lot of them either the driving experience is awful or they are very expensive (or both).

(Question: How well do EVs such as the Tesla corner?)

But for a lot of people, the plug-in hybrids might be the perfect EV.

What do you think? Let me know in the comments below.

Posted by S. Evan Townsend at 9:46 AM No comments: 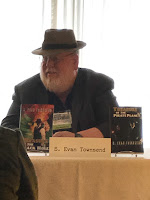 I will be at SpoCon this weekend at the Davenport Hotel, downtown Spokane.

Here are my scheduled events:

1:00 PM: "Care and Feeding of a Writers Group" Matador Room

I hope to see you there! 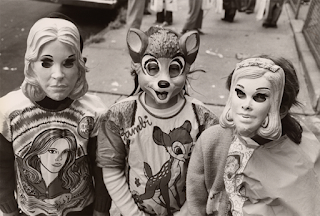 When I was a kid in the 1960s (yes, I'm that old), Halloween costumes you bought in the store were awful. For example, see the picture at left. What you usually got was a mask and a plastic top (that would probably go up in flames if it touched fire) that had a picture of the character and often their logo/name. The Bambi "costume" in the middle is a perfect example.

And, at the time, I thought "that's not a very good costume, it's more like an ad my parents pay for me to wear." So, I often wore homemade costumes. I don't ever remember wearing one of those abominations.

One year, my mother found a mask that was translucent and make me look like an adult male. I wore that with a tie a sportcoat to be an adult. I once made a robot costume out of a Clorox bottle and a devil costume. I don't remember any of my other costumes from when I was that young.

What kind of costumes did you wear at Halloween? What do you think of the costumes shown above? Let me know in the comments below.