The Speculative Fiction Cantina with Dan O'Brien and Birgitte Rasine

Today on the Speculative Fiction Cantina we are pleased to welcome writers Dan O'Brien and Birgitte Rasine.

Dan O’Brien has written over 50 books––including the bestselling Bitten, which was featured on Conversations Book Club’s Top 100 novels of 2012. Before starting Amalgam, he was the senior editor and marketing director for an international magazine. In addition, he has spent over a decade in the publishing industry as a freelance editor. You can learn more about his literary and publishing consulting business by visiting his website at: www.amalgamconsulting.com.

Birgitte Rasine is an award-winning author, journalist, producer, and entrepreneur whose work marries sustainability with storytelling, mobile apps with print books, and art with technology. She is the author of numerous literary works and articles, and has spoken on topics ranging from media to sustainability on three continents. Birgitte’s books and mobile apps have been recognized by design and publishing awards and honors from organizations such as the Eric Hoffer Award, International Academy of Visual Arts in Los Angeles, Press 53, and the Alliance of Independent Authors.

A former journalist and screenwriter for the Hollywood film industry, Birgitte holds a BA in Film Aesthetics from Stanford University, studied cinematography in Los Angeles, and completed a international relations program in Spanish in Madrid, Spain.  A member of various literary and professional organizations including the Independent Book Publishers Association (IBPA), and the California Health Medical Reserve Corps (CH-MRC), among others, she lives in Northern California with her family. Her web site is www.birgitterasine.com. 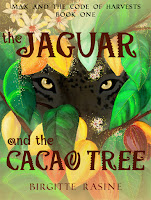 The Jaguar and the Cacao Tree