Why I Started Writing 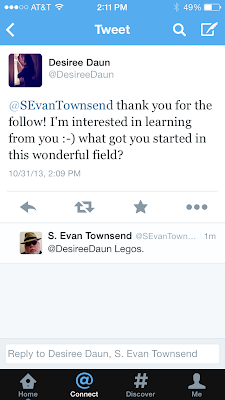 I don't believe I have ever told, here at least, the story of how and why I became a writer.  And doing so was inspired by a tweet I received on my Twitter account (see picture at left).  I was asked "what got you started in this wonderful field?" and I replied "Legos."  Which while both true and accurate, is not the complete story.

In circa 1966 I received a set of Legos for Christmas.  It was a pretty extensive set for the time, with wheels and lots of blocks and different pieces.  At that time they did not give you instructions (at least I don't remember any).  Now they have a picture on the box of what you're supposed to make and instructions.  I think that's just stupid.

Anyway, the first thing I remember doing with my Legos was building cars, trucks, airplanes, helicopters and making up stories about the worlds I built.  (My mother once observed that while I preferred making vehicles, other children seemed to build houses; even then I liked fast things.)

Meanwhile, I was a television junky.  I loved TV even though we only had two channels in southeastern Idaho (we got a PBS station around 1973 and finally an ABC affiliate around 1976).

I loved stories.  I loved watching them on TV and I loved making them up with my Lego worlds.
When I was about 12 I decided I should write my stories down.  I taught myself how to type using my older sister's high school typing manual and "borrowed" my older brother's typewriter.  I'm assuming whatever I wrote in those days was pretty jejune.  Nothing has survived, as far as I know (thank God).  But I kept writing,, for almost 40 years I kept writing, working on it off and on as I went through the stages of my life, including 20 years in the business world.

It took me nearly 20 years to finally be published, and now I have four books published (and 6 written, but we won't talk about that).  I'm working on a science fiction novel now.

And that's why I started writing: Legos.

Which is interesting because I'm sure my parents never had any idea that Legos would lead me to writing.
Posted by S. Evan Townsend at 2:29 PM