For the past two weeks I have not been able to watch the University of Washington Huskies play football wearing my lucky hat and one of my two jerseys (purple for home games, white for away).  And the last two weeks they lost, badly.  The week before I was able to watch them play Stanford, ranked #5 at the time before their loss to Utah, and I believe a bad official call cost them a chance to win that game.

Two weeks ago I was at a writers' retreat and unable to watch as they played Oregon.  Now, admittedly, Phil Knight's money bought the Ducks the #2 team in the nation.  I didn't really expect them to win.  But I hoped they wouldn't get slaughtered.  The score was 24-45.  That's pretty bad.  That dropped the Huskies to #20 in the rankings.

But this week we played Arizona State.  ASU was briefly ranked #22 in week six but a loss at Notre Dame dropped them out of the top 25.  I was not worried.  The Huskies had proven themselves capable.  With the win at Illinois they seemed to have broken the away-game curse (having not won an away game for ages before that). 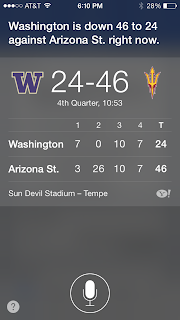 I, again, didn't watch the game.  I was at a Toastmasters conference out of town.  I did my best to follow the game through Siri on my iPhone.  I was not happy.  This was not what I expected nor wanted.  It was as if the Huskies of old were back.  I got a bit of teasing about what a huge Husky fan I am but I pointed out that I hung through the Willingham era.

The final score was 53-24.  I don't know what happened.  I didn't see the game.  I wonder if they were so beat up by Oregon they came into this game already defeated.  I don't know.  I do know my dreams of a 10-2 season are gone.  Best now would be 9-3 (and we still have to face UCLA which is currently ranked 12th).  And as a result of this game, the Huskies dropped out of the top 25 (and will be lucky to get back in, unless they beat UCLA in some miracle).

And the horrible, horrible thing is, Washington State has a better record than the Huskies at 4-4 (2-3 in the Pac-12) versus the Huskies 4-3 (1-2 in the Pac-12).  I'm thinking this might be an 8-4 season, which is only a slight improvement over the past two years' 7-5.  Next week we play hapless California (1-6) at home so maybe we can get our groove and confidence back before the last four games of the season.  I do know one thing, it would take an act of God for me not to be in front of the television with my lucky hat on (which is 4-1 this season).  Yes, I try to think scientifically.  But when it comes to sports, there's not much science involved in my love for the Huskies.
Posted by S. Evan Townsend at 12:56 PM