Today on the Speculative Fiction Cantina we are pleased to welcome writers Ronald Russell Farnham and Leisa Ebere. 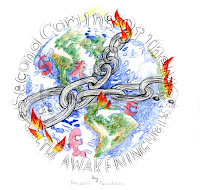 Ronald Russell of the family Mass-Lavori is the Authorized Representative of RONALD RUSSELL FARNHAM [a UNITED STATES OF AMERICA CORPORATION].

Ronald Russell holds a Bachelors Degree in Business. He is a screenwriter, author, director, actor, and a member of the screen actors guild.  He has performed in live-theatre, worked on hundreds of studio level feature films, live TV, pre-recorded TV, been a commercial spokesperson, and has hosted unscripted reality shows.

He has been a casting director, line producer, executive producer, and has just released the feature film that he produced and directed in Los Angeles, titled, HOLLYWOOD AND VINE, which is an action adventure conspiracy about the female messiah who writes the book to end war and poverty on earth and she teams up with a female Russian double agent and a CIA agent to stop Islamic Radical Terrorists from detonating a dirty nuclear bomb at the Hollywood and Vine Train Station; saving the world from a devastating global nuclear conflict.

Ronald held a Top Secret Clearance with the department of defense where he was an active duty Army Intelligence analyst, Korean linguist, counter terrorism analyst, and a trainer of Special Forces Analysts and Head Quarters Special Operations Command.

Teaser for HOLLYWOOD AND VINE   https://www.youtube.com/watch?v=t_OAdjYKdik

Ronald has created, produced and directed music videos, documentaries, reality shows, episodics, and feature length motion pictures.  Ronald’s personal theme with everything that he creates is “Enlightenment Through Entertainment.”

In addition to reading thousands of top secret messages about situations across the world through which he garnered a picture of the true nature of geopolitical relationships that are diametrically opposed to the information distributed on the nightly news, he is an avid reader of metaphysical books, motivational material and spiritual enlightenment books.  He is a fan of Gene Rodennberry’s Star Trek concept of a galactic federation and an earth that operates without a monetary system.

His newest book and documentary that will both be out the holiday season of 2017 is titled, THE PEOPLE VS THE UNITED STATES OF AMERICA. It contains his truth-based solution that will end war and poverty on earth.  The solution must be released into the mainstream before the final stages of World War Three [the Global War on Terror] reach the point of no return, which will destroy mankind leaving only the Global Military Industrial Complex.

Ronald recently released a DVD titled, RONONYMOUS which contains the first step of the solution to end war and poverty and it can be found on Amazon.   https://www.amazon.com/Rononymous-Ronald-Russell-Farnham/dp/B01J4E22GC/

His book, The Second Coming of the Messiah may be categorized as science fiction, but the metaphysical concepts are based on the most recent theories.  The government and military portions are based on his real experiences.  The solution for planetary sovereignty by collapsing the world government and its monetary system is based on a viable and executable idea that he has researched and created.

In 2009 Ronald began producing and hosting the reality show, The Ronald Show, Documenting the collapse of Life as we know it as Perpetrated by the Global Military industrial Complex.”  Ronald hosted and distributed 47 one-hour episodes and has 20 more episodes in post production.

In 2006 while Ronald was the Pathfinder trainer of Special Forces analysts at HQ SOCOM, he was faced with a dilemma after undergoing an awakening by reading the book “A course in Miracles”.  His dilemma was to either continue serving the psychotic and corrupt Global Military Industrial Complex, or quit and devote his passion to Enlightenment Through Entertainment.  He chose the latter and resigned from the world of the Department of defense where he had held a Top Secret Clearance for 13 years.

Ronald also just published the first of his series of Docu-Dramas, TRUE STORIES EPISODE 1 THE UFO ABDUCTION OF ROB AMOS. It begs the question if a military psychological operations program is perpetratring fake USO abudctions to create anti-alien sentiment throughout earth.   https://www.amazon.com/TRUE-STORIES-Episode-Abduction-Amos/dp/B01FT6W566/

Ten years ago, in 2006 Ronald created Enlightenment Thru Entertainment Productions [E.T.E. Productions] in his effort to create motion pictures that speak directly to the subconscious of his audience.

How to Write a Screenplay in 30 Days or Less (nonfiction)

Leisa Ebere, was originally born in San Francisco, California and now resides in Gravesend in the UK. She is married with three children and one grandchild.

Leisa has been writing poems and stories since the age of twelve and was inspired to write Crows and Angels, her new novel, by the stories her grandmother told her, of her ancestors settling in the Dakota Territory.

Leisa grew up on a horse ranch in the Northwestern United States and is 1/16 Sioux Indian by birth; and has a special place in her heart for Native Americans. Her aim is to tell their side of the story through her writing.