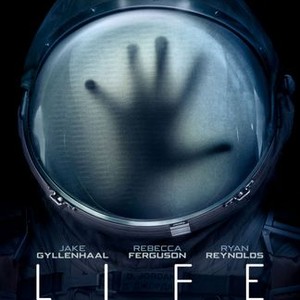 Last week I watched on Netflix disc the movie Life. Even though it had horror elements (and I don't do horror), I watched it because of its science fiction based setting. It takes place in an International Space Station of the near future (it has holographic displays).

First the good: the movie always had the characters in free fall, as they would be in Earth orbit. When the thrusters were fired (there are thrusters on the space station?) the people inside felt the acceleration. The movie did a good job portraying free fall, with only a few times where it didn't work well. For instance, a character sets down a tablet and it obviously is in gravity because it drops a bit when he lets go of it. So I had less problems with the basic science of this movie than I did for a movie such as Gravity (which also took place in near-Earth orbit).

One other problem is sound. The movie (like most scifi movies) had sound in space, including debris flying by a space probe. The only movie I know got this right was 2001: A Space Odyssey. I say again: there is no air in space and therefore, no sound outside of space ships with air inside them.

And the movie Life was very derivative. It's a "trapped in space" horror flick (think Alien) about something scary brought from Mars (sort of like The Andromeda Strain). While the actors do a good job and the movie is scary and tense most of the time, you do have to over come the disbelief that the monster (named "Calvin" by the space station crew) grew that quickly from a single cell.

Also, the crew sleeps in these over-engineered sleeping chambers (which become important later in the film). On the space shuttle and on the current space station, crew sleep in bags attached to the walls. This is simple and works and doesn't require a lot of resources. An engineer would love it.

If you like horror and trapped-in-space movies, you'll probably like Life more than I did. It's probably pretty good horror and it's fair science fiction.
Posted by S. Evan Townsend at 6:00 AM