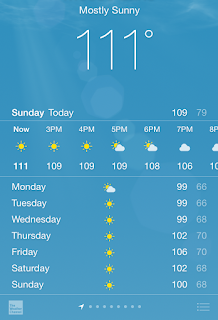 I stayed inside where my air conditioner kept the house at a nice 75°F (23.8°C). I was sipping ice water and watching Aliens on my flat-screen television. And I got thinking about how much of what I was doing would be, to someone 50 or 100 years ago, be absolute science fiction.

Fifty years ago, air conditioning in houses was very rare. One hundred years ago it hadn't been invented, yet.

Fifty years ago you could make ice in your freezer, but had to use ice cube trays which limited production. Because of my ice maker, I have a near limitless supply of ice. One hundred years ago, you had to get ice out of lakes and rivers in winter and store it through the summer. The ice man brought it around to put in your ice box.

Fifty years ago the cell phone was a pipe dream and smart phones were in Dick Tracy comics. One hundred years ago the phone was rare and expensive and didn't work very well.

Fifty years ago, television was black and white and the largest screens were less than 20 inches. One hundred years ago radio for commercial purposes has just under development.

Fifty years ago you never watched a movie at home except maybe one interrupted by commercials on your small black and white television. One hundred years ago, movies were silent and black and white.

Can you imagine going back fifty years with your smartphone and laptop computer. You'd probably double the computer power of the world at the time. If not more than that. But people would be amazed at what you could do (of course, there's be no cell towers so you couldn't do much with your phone other than play Angry Birds).

Now think about fifty or 100 years from now. How will things be different. We probably can't even imagine.