Here is one Twitter trick you need to know and it seems few do.  For example, last Monday night as I was watching 24: Live Another Day, I had this Twitter conversation: 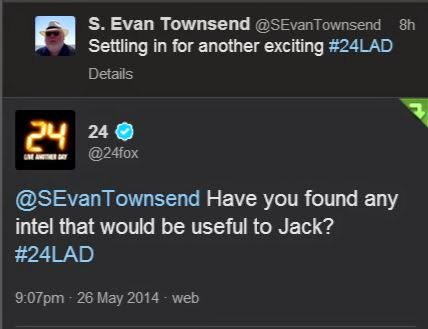 Okay, that's pretty cool that the Fox 24 Twitter account responded to me.  They have over 100,000 followers.  But the bad news is, because they started the tweet with my user handle (@SEvanTownsend) only I saw it.  This is something a lot of people on Twitter don't seem to understand.

Start a tweet with a user handle and only that person and people who follow both of you will see:

will only be seen by @DaleJr.  So put something in front of the user handle:

Or if your tweet is long and bumping up against 140 characters, just put a period (dot):

.@DaleJr that was a great race the way you came from behind. #Daytona500

So I wasn't sure if the @24Fox account intern who does their social media doesn't know this, or they did it on purpose.  Because sometimes you only want the person you're addressing to see it, not all your followers.  However, this isn't as private as a Direct Message (DM) so don't use this for anything you don't want others to see.  If someone looks at your tweets, they'll see this message.

I am constantly amazed at how many people on Twitter don't seem to know this trick.