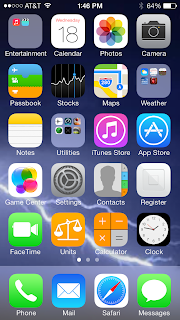 I've had iOS 7 on my iPhone now for about 24 hours.  It took a while to get it to update.  Completely refused to do it via WiFi on the phone (probably due to server overload) so had to go through iTunes and that needed to be updated and the computer rebooted.  It was a bit of a hassle and not in keeping with Apple's "easy as pie" reputation.  But once I got the file to download (it kept erroring out again probably due to server overload) it installed on my phone with no problems.  The whole process (not including updating iTunes) took about 15 minutes starting with the time the file finally downloaded.  (Hey, Apple, how come when I'm downloading a file and the download stops, I have to download the whole dang thing again and it doesn't start from where it stopped?)

A bit a of warning: I love my iPhone.  But I've only had three smartphones in my life: an HTC Fuze, and iPhone 4, and an iPhone 5.  After how truly awful the HTC was, the iPhone 4 was just amazing to me.  And the iPhone 5 was even better.  I've never had an Android phone so I have no baseline to compare the iPhone to an Android.  I've heard good things about the Samsung Galaxy series.  But it'll take a lot to get me to give up my iPhone.

As I said, I've had iOS 7 for about 24 hours now and my first impression is: I like it, but it's not an amazing upgrade.  They seem to have simplified the graphics giving them almost a cartoonish look perhaps to speed up the processing and thus the phone (it does seem faster).  It uses a lot of transparency which can be distracting (even if it looks cool).  And it has this cool thing where the background picture (wallpaper) moves in relation to how the phone is moved, giving it a 3-D effect.  But after about a day or two, I suspect no one will care.  There's a lot of other graphic silliness that will soon fail to impress.  And some of the sounds have changed.

I like how Safari now handles multiple webpages, seems faster and easier to use.

Typing seems easier and more accurate.  They have put the security code input on one screen by itself so the buttons are bigger and farther apart.  I used to have a lot of trouble typing the code in if I did it quickly.  Since I've gotten iOS 7 I've miss-typed it only once.  And for texts and emails the typing seems better.  I used to almost always hit the backspace when trying to type an "L" or "M" but I haven't done that since upgrading.  While I don't like how the calculator looks, it seems I make less operator errors (hitting x instead of +, for example).

I wish I could change the color schemes on the text messages as the simple blue and white scheme seems too plain.  And Siri sounds more human (and comes with a male voice option) so she seems to have lost some of her quirky charm. And they've changed a bunch of the icons so you have to re-learn what the icons mean.  That's a bit annoying.  Putting an appointment in the calendar seems to be an exercise in frustration because the rollers for changing date and time aren't distinct and I found myself moving the whole screen trying to move a roller.  A little over-simplified.

Some of the old cool effects are gone.  For instance, when you delete and email is zooms down and gone very fast.  I like the way it seemed to get sucked into the garbage bucket in the old OS.  I have to admit, it's faster.  And if I leave the mail app in an email, when I get new mail and re-open it, it opens in that email, not in the inbox.  I don't remember the old OS doing that.

I've read that this OS update is to make the iPhone more up to date to compete with Android phones.  One thing that is very risky for a company to do is imitate the imitators.  Perhaps the iPhone was getting staid but some of the changes seem to be a backward step in graphic beauty, not a great leap forward.  Also, there was, for me at least, a bit of a steep learning curve on some things.  I couldn't figure out how to erase email from the inbox until my wife showed me, for example.  And it took me forever to figure out how to put my favorites in Safari favorites that it opens automatically when you ask for a new webpage (that can be turned off but I liked it, just wanted my favorites in there).  I thought the old OS had a very beautiful graphic interface. iOS 7 seems to dumb that down with lots of primary colors and no shadows or reflections.  There's nothing hugely wrong with iOS7, it's just not amazingly great.
Posted by S. Evan Townsend at 2:15 PM