iOS 7 After a Week

Last week after I'd had iOS 7 for about 24 hours on my iPhone 5, I did a review of it.  Now I've had iOS 7 for a week and I have some further thoughts and updates.

Probably because I'm getting used to it, I'm liking it better.  I've used AirDrop a couple of times just to try it out but when I tried to do with it a friend for an actual use (sending him a contact) it didn't work even though he had it turned on, he said.

My biggest complaint is still the simplified, primary-colors graphics.  They seem a step backwards from the old OS.  For example, still, setting up an appointment in the calendar is difficult because the rollers are hard to distinguish as shown in this picture: 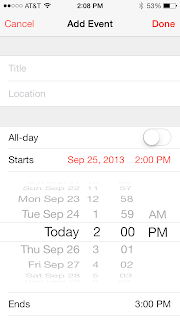 ﻿
Siri seems smarter and able to understand better.  And she doesn't say "Would you like me to search the web for that?" every time she doesn't know how to respond.  She (he, there's a male voice option now) actually is probably more useful (I've already used her to text while driving).

I have no idea why Apple decided to change the delete protocol from swipe left to right and change it to swipe right to left.  At first this really annoyed me.  But I'm getting used to it.

The camera has two options for picture size and a bunch of filters that no one is going to use much unless they are really into photography (like my wife).

So all in all a good upgrade, if only the graphics were better.

I ordered an iPhone 5S yesterday (the fingerprint reader sucked me in) so maybe when I get that I'll blog about it.  It comes with iOS 7 preloaded.
Posted by S. Evan Townsend at 2:28 PM