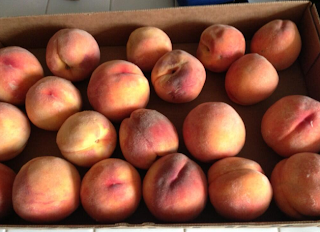 I love fruit.  I really like oranges and peaches and pears (although it seems pears are hit-and-miss, they are perfectly ripe for about half an hour, otherwise they taste like wood or are much).  So when I had a chance to get some peaches right off the farm, I took it.

Last week I was driving south of where I live to interview a man for a freelance writing assignment.  I sort of took the back way (that was shorter) and on the way there I passed a sign pointing right that said "Peaches."  And I thought "Hmmmm, peaches."

So on the way back from the very successful interview (which turned into a great story), I saw the sign again, except this time pointing left (because I was going the opposite direction).  So I turned left and followed the road.

Now in that part of the county, the roads tend to be a) straight as an arrow and b) one mile apart.  So I kept going (west, incidentally, away from home) and passed one road (one mile) and then passed two roads (two miles) and kept wondering if I'd either missed it or it was a long ways down this road.  I was driving between row-crop fields and fruit orchards on this west-heading vector.

Finally (and looking at my gas gauge) I decided to give up and turn around.  I pulled to the side of the road and was about to turn when I saw a sign ahead that said . . . well, I couldn't read it.  I drove a bit closer and sure enough it said, "Peaches" and the arrow pointed right (or north).  "I must be getting close," I thought.  So I turned right and drove down that road maybe a half a mile.  I was just about to give up again (still nervously looking at my gas gauge that was hovering near empty) when I saw a sign saying the peaches were to the right, now.  I turned.  It was a gravel road with a warning sign: "Primitive Road: No Warnings."  But I kept going (albeit slowly to minimize rock chips on my car).  Went up a hill and behold, there was a sign: "Peaches" pointing into a farmstead.  So I pulled in, parked the car by the metal shop, and got out.  The door on the shop was open and a sign by the door said (you guessed it) "Peaches."

I walked toward the shop and this girl about 15 or 16 years old comes out.  Pretty little thing with long red hair with a slight curl to it.  She had braces on her teeth.  "You want some peaches?" she asked.

"You suckered me in for about five miles," I said, exaggerating sliglty, "so you'd better have peaches."

She didn't react but she said, "They're in here."  I followed her into the shop.  "They are $20 a box or 80 cents a pound," she said pointing to a large commercial refrigerator with glass doors.  Inside I could see boxes or peaches.

She picked up a flat box (like they put stuff in at Costco) and started putting peaches in it, inspecting each one and rejecting those she didn't think were up to snuff.  Then she asked if that was enough when the box was full.  I said it was so she weighed it on a huge industrial scale.  It came to 7 pounds (with the box).  So I was pulling out my wallet when she handed the box to me and said, "Take 'em."

So I thanked her and said that that was defiantly worth getting sucked into from five miles away.

I put the peaches on the floor of the passenger side of my car, and drove home.  Did not run out of gas.

And the peaches are amazing.
Posted by S. Evan Townsend at 8:30 AM