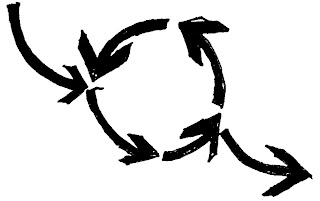 According to something I read by Robert Heinlein, he would type up his manuscript (on a typewriter, that is, no spell check, no autocorrect, etc.) then go through it and see what to cut out, then send it off to the publisher.  That just amazes me (especially the no spell checker part).

The way I write is completely different.  I write my first draft.  Then I go back and re-write and edit it.  And I do that again, and again.  And my manuscripts always get longer as I realize I need to add more description or detail.  With my latest project I had my wife read it out loud to me, which was a great way to hear things that needed to be changed.

Even then I'm never quite satisfied.  The other day I was reading a passage from Hammer of Thor and I came across a sentence I thought I could have written better.

So to me, writing is an iterative process.  For example, in my work in progress, Gods of Strife (the fourth novel in the Adept Series), I described a female character as:

I'd often heard the cliché "face of an angel" but in this case it appeared literally true.

And I didn't like that much.  It felt as if I were saying to my readers "Yes, I know this is a cliché but I'm going to use it anyway."  But at the time I couldn't come up with something better but that was always a nagging sensation in the back of my brain.

Monday I was driving on a 100 mile journey and I started thinking about that passage (interstate, cruise control set, not much traffic).  And I came up with an idea to improve it.  So I changed it to:

Her features were china-doll delicate, as if she would shatter if touched without care.  Fair skin almost the color of freshly-fallen snow seemed flawless, without a mark or freckle.

I was sort of plagiarizing myself out of something I wrote in 2005 that never got published:

The Japanese waitress asks me something and I'm suddenly aware of how painfully and delicately beautiful she is.  It's almost as if I touched her she would crumble.

(The local writers' group says I use too many -ly words.)

But there were too many ifs in that first sentence.  But "as if" couldn't be changed because a) to do so would make it grammatically incorrect and "delicate like she would shatter" just doesn't sound as good to my ear.  So the second "if" had to go.

I was lying in bed last night and I, for some reason, was thinking about this passage when it hit me how to change it.  So now that first sentence reads:

Her features were china-doll delicate, as if she would shatter when first touched without care.

And I like that much better than my cliché that I originally wrote.
Posted by S. Evan Townsend at 5:51 AM

Email ThisBlogThis!Share to TwitterShare to FacebookShare to Pinterest
Labels: Gods of Strife, writing