The Speculative Fiction Cantina with Alexander Galati and Angela B. Chrysler

Today on the Speculative Fiction Cantina we are pleased to welcome writers Alexander Galati and Angela B. Chrysler.

Alexander Galati began writing fiction when he was seven, with his first story about a chicken having its first day at school. But aside from writing, Alexander also embraces his athletic and musical side. He excels in the piano and achieves well in sports, and now he’s decided to continue his hidden skill that is writing. At fifteen, Alexander began writing Amadon Outside, his first published work.

The world for Amadons Outside was inspired by a game he and his cousins used to play together when they were young. Within a few weeks, he had created a storyline around this world in his mind, forming characters as he went along. 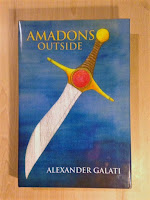 Amadons Forest of the Ghosts

Angela B. Chrysler is a writer, logician, philosopher, and die-hard nerd who studies theology, historical linguistics, music composition, and medieval European history in New York with a dry sense of humor and an unusual sense of sarcasm. She lives in a garden with her family and cats.

Dolor and Shadow (Tales of the Drui Book #1)

Fire and Lies (Tales of the Drui Book #2)

From Today's Show: Mysterious Pulses May Be Signs of Alien Life (seriously)