I experimented with "boosting" a Facebook post on Monday. To boost a post, you pay money to Facebook and it becomes one of those "Sponsored" posts you see in your time line. This has to be done through a Facebook "page" such as my author page. You can set up who you want to see it. I set it up so that it was people in the US, 18 - 65+, and one of their interests is "Science Fiction." I boosted a post about Treasure of the Black Hole. And I set a budget of $10.

The first time I tried to boost a post, it was rejected because there was too much text in the graphic (which was just my book cover). So I had my wife, who does graphic things on her iPad I can't do, make a graphic with less text: 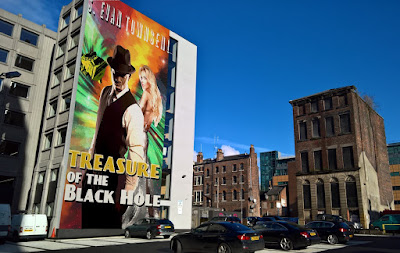 I boosted the post with that graphic and it was accepted.

So what were the results? There were 870 people "reached" (I assume that means they saw the post). Of those, 235 were "organic" (meaning they would have seen the post without boosting it). The rest, 635, were paid. I had 21 posts "likes" (which probably increased the organic reach) and 7 post "clicks" which would have taken them to the Amazon page for the book.

With that result, I'm not sure "boosting" is worth it. Yesterday I posted a post about another book and it's organic reach was 182 people "reached." And that was all free.

So now I'm thinking boosting isn't worth it. Or do I need to boost it again to drive the point home to people? You know, sort of like they do on TV with running the same ad over and over again? I don't know.
Posted by S. Evan Townsend at 9:35 AM

Email ThisBlogThis!Share to TwitterShare to FacebookShare to Pinterest
Labels: Random Thoughts, Treasure of the Black Hole