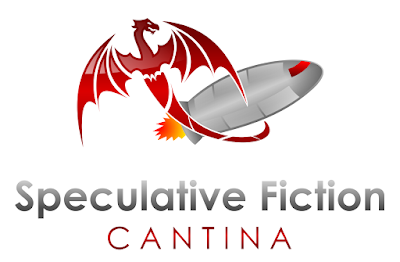 Today on the Speculative Fiction Cantina we are please to welcome writers Robert S. Hoyle and Sommer Nectarhoff.

Then was hired by UNIVAC the 2nd biggest computer company in the world which, by accident, involved me with the USSR buying organization who were sold some computer which were becoming obsolete.

Went to the Univac training collage in Ilion NY where another accident after 5 months resulted in me
Going to the US Air Force in Germany where I installed the first two overseas online computers. Then 3 years in Libya, during King Idris’s reign based at Wheelus Air Base outside Tripoli. The wonderful Roman cities of Sabratha and Leptis Magna were visited and my wife and I discovered a new small Roman site nearby with great mosaics and many coins lying around.

A year after the Arab/sraeli 1967 War I went to IBM Tripoli and one year later to Beruit ,Lebanon leaving Tripoli 2 days before Ghaddafi took power. I moved to the Arabian Gulf, based in Kuwait and 3 years later was hired by OECD {Organisation for Economic Cooperation and Development} as a Visiting Assistant Professor to teach MBA and MSc students at a Turkish University in Ankara.

Five years later I moved to alluvial diamond mine in South West Africa {now Namibia} but disliked the Afrikaaner attitudes [this was under apartheid] and was glad to get out after only 15 months.
I then went to Saudi Arabia working for Ralph M. Parsons, supervising the first days of the building [to take 27 years] of a brand new city at Yanbu on the Red Sea. We had first to build a town for the 27,000 workers from all over the world with a floating desalinization plant and all supporting services.

My wife, together with the majority of foreign females in Saudi Arabia, was less enthused with the life there although a long holiday in Hawaii, Hong Kong, USA and Crete helped.

We moved to Sri Lanka, which my wife considered her favorite country and I gave management advice to tea planters and other businesses. We also visited many areas in India [my favorite country], the Maldives and Kashmir.

I was planning to go to a S. American country but after receiving letter of welcome addressed to Comrade Robert and signed by xxxxx. Comrade President took a job in Scotland for 7 years before retiring to Spain 25 years ago,

The Winners? COCANZ v. The Group

Sommer Nectarhoff is a writer from Chicago. He's always loved to read and write both fiction and poetry. His shorter pieces have been published in a variety of literary journals, and he is the author of numerous books to date, including the fantasy series The Book of Lokk. Also I’ll be attending an MFA program next fall.

From today's show: The floating hills of Pluto.