(This post contains images that may not be appreciated by some people. Scroll down at your own risk.)

There's a meme of sorts on the ol' Internet about Trypophobia. As Wikipedia states:

Trypophobia is the pathological fear of objects with irregular patterns of holes, such as beehives, ant hills and lotus seed heads. Thousands of people claim to have the condition, but it is not recognized as a condition in the American Psychiatric Association's Diagnostic and Statistical Manual of Mental Disorders (DSM) or other scientific literature.


I think it all started when a picture showed up on Facebook, something that tried to get you to click it for (I believe) malicious reason. This is a screen capture of the picture:

I never clicked the picture because 1) I pretty quickly recognized it as a photoshopped image of a breast and a lotus seed pod. And 2) I figured it had malicious intent.

But apparently it freaked a lot of people out who suffer from trypophobia.

Me, however, was sort of fascinated by it. If you'd like to see it without that "play" graphic in front of it, it's here.

Then I sort of forgot about it and a couple of years or so passed.

I have this app on my iPhone called SkyGuide. It's really cool as it shows the sky in almost any place in almost any time (including where you are and current time). I used it the other day to identify a bright object in the western sky as Venus.

For the Chinese new year, they changed the app's icon to this; 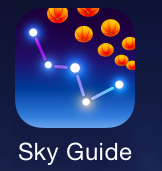 (Those are supposed to be Chinese lanterns.)

And every time I see that, I fine myself wanting to see more of this kind of thing: I seem to find such things visually interesting and fascinating.

So, apparently, I suffer (not) from Trypophillia. A love of holes. I have no idea what that says about my psychological makeup.
Posted by S. Evan Townsend at 8:00 AM