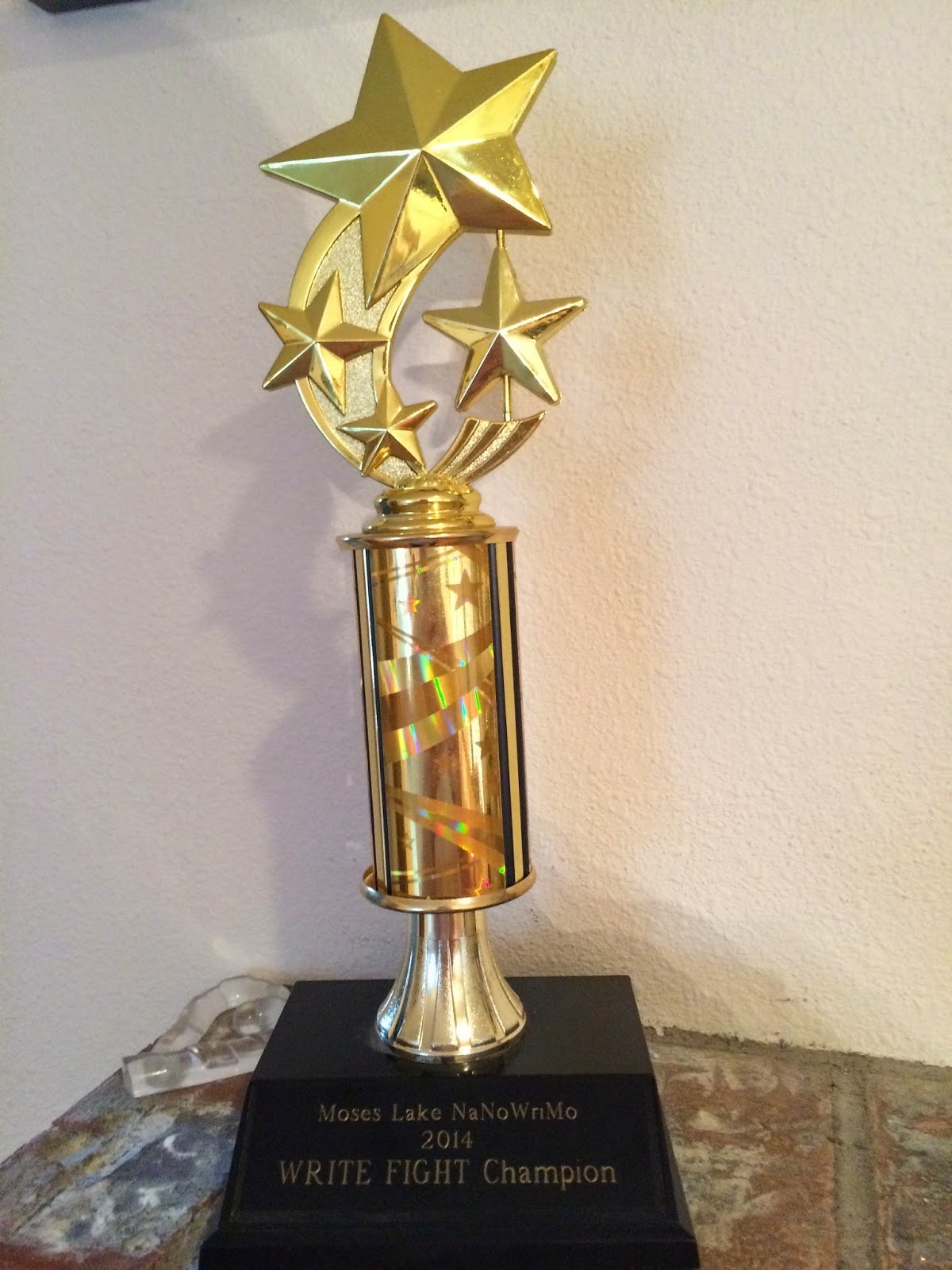 As part of our local NaNoWriMo local region's TGIO (Thank God it's Over) party, we had a "write fight." And I won (see trophy at left).

How this worked was the referee gave two writers three random writing prompts. They then had four minutes to write something (not long enough for a story). The referee read the stories without saying who wrote them, and then the group voted on the best.

We started with eight participants in the single-elimination tournament. Which meant I had to compete three times. And this was done with pen and paper so I had the added challenge of trying to write neatly (see writing sample below).

Here are the three vignettes I wrote (unedited except for spelling):

"Why do we have to be here?" Goofy gushed.
"You won the lottery. You're rich now. This is what rich people do."
"But I don't like orchestra music."
"You're rich now. It doesn't matter what you like."
"I had more fun when I was a poor goober farmer."
"Shut up, the music is about to start."
"Who are you anyway," Goofy asked.
"I'm the lottery enforcer. I make sure you do your part to earn your $10 million."
"Garsh!" Goofy exclaimed.
"Hey, you turned in the ticket. Didn't you read the contract?"
"I don't want to be rich."
"Too late, pal."

Second Round: prompts: a toupee, a sleuth, an evil roommate.

Detective Larkin studied the toupee. It was resting on the carpet, looking forlorn and unwanted. But it was the blood that most interested Larkin.
"I didn't do it, man," the roommate whined. "Not that he didn't deserve it, wearing that stupid toupee and sticking his fingers in his ears watching anime."
"So you deny killing your roommate?" Larkin asked.
"Yes!" the pudgy man cried. "I don't even own a stiletto."
"I never said he was stabbed with a stiletto." Larkin smirked.
The roommate shrieked and ran for the door.
Larkin pulled his gun and yelled, "Stop!"

Winning Round: prompts: a lemon, an alien, a Venus fly trap.

The ship landed among the rows and rows of trees. Out came what any human would call a Venus fly trap but it was instead from Mars and ate mosquitoes.
From the trees hung bulbous, yellow fruit The alien took one, went back into his glittering ship, and with a muted yelp it shot into the azure sky.
The alien walked to his commanders quarters and present the fruit.
"Fool!" the commander bellowed. "That's a lemon. My doctor's orders were explicit: put the lime in the coconut and call him in the morning."
"Forgive me, sir," the alien trembled.

I have to say this was fun and challenging and I came out on top of some very good writers. It's very difficult to write something coherent in four minutes. I hope we do this again next year.
Posted by S. Evan Townsend at 11:13 AM