Not Just Different or Weird

Having a brain somewhat afflicted of ADD can be both a blessing and a curse.  Sometimes I'll find myself thinking about something off the wall and wonder how the heck that happened. Or I'll be humming a song I haven't heard or thought about in decades.  So I was wondering earlier today what made me think of the move, The Fifth Element.  Then I realized it was a text conversation I had a few days ago with my friend Sare (who has shut down her blog).  Since we live on different coasts (and she in Canada) we almost exclusively communicate by texting (iMessaging, to be exact, other wise each text would cost me $0.50) with the occasional email thrown in.  But there I go being ADD again.

So here's the conversation we had: 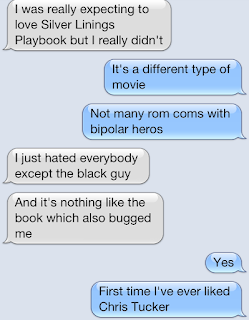 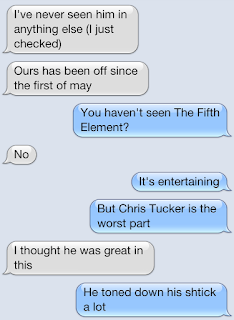 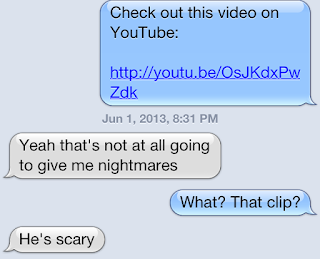 That clip is here.

So that got me thinking about The Fifth Element.  This movie is sorta so bad it's good.  The best part is Gary Oldman (who I'd watch reading out of the telephone book) and Leeloo Dallas Multipass.  It's a guilty pleasure for me but I really wish the whole Chris Tucker part had been cut.  Not that it gives me nightmares, I just hate it.  It's incredibly annoying and just brings the movie to a screaming, thudding halt.

Okay, so now I'm going to get to my point.  The Fifth Element was co-written and totally directed by Luc Besson who's this French guy who has directed some pretty good moves including La Femme Nikita and Leon: The Professional (with a very young Natalie Portman).  According to the Internet Movie Database he's produced 118 movies.  But among all his credits there's only one science fiction move: The Fifth Element.

A lot of people in the entertainment industry seem to think that to make something "science fiction" you just set it in the future, throw in some technology, come up with a nice special effects budget, and bam, you've got science fiction.

I'm going to get really obscure here.  In 1995 there was a "science fiction" TV movie called "White Dwarf."  Now all us astronomy geeks know that a white dwarf is a kind of very old star.  But that T.V. movie was the epitome of science fiction written by people who don't understand science fiction.  First of all, the science was just wrong on so many levels.  It was really more of a space fantasy.  And then they just threw in some weird things and called it "science fiction."  Near the beginning one character refers to something being the size of a "volleyball."  Okay, we're how far in the future and on an alien planet and we're talking about volleyballs?  Oh, and the movie had nothing to do with a white dwarf, star or otherwise.

Man, this is getting long so I'll cut to the chase: science fiction is about exploring the human condition in conditions no human has seen.  You can't just have a neat setting and some high tech or weird things, you have to have a reason to have the story (which is generally true of all fiction from high literature to pulp science fiction).  So while I kind of enjoy The Fifth Element for its visuals, humor, Gary Oldman's quirky performance, and Milla Jovovich running around scantily clad, it's not good science fiction nor really a good movie.

And I think that's sort of what George Lucas forgot in the Star Wars prequels (at least the first two). It's not the visuals, it's not the strange stuff, it's the humans, the people.﻿
﻿
Posted by S. Evan Townsend at 1:09 PM

Email ThisBlogThis!Share to TwitterShare to FacebookShare to Pinterest
Labels: movies and television, writing