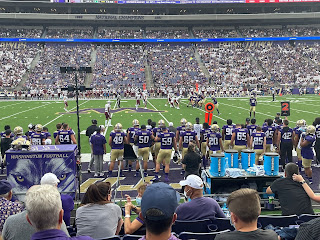 The University of Washington Huskies football team is 0-1. They lost to the Montana Grizzlies on Saturday. I was at the game almost on the 50-yard line, seven rows up from the field (see picture).

This is a humiliating loss because Montana is a FCS team (that means the school is smaller and unable to recruit the best players) and Washington was a ranked team. I'm sure when the AP top 25 football rankings come out tomorrow, the Huskies will no longer be ranked.

The Husky quarterback Dylan Morris had 27 completions out of 46 attempts and was intercepted three times. And late in the fourth quarter, he missed critical down plays, including a 4th down that turned the ball over to Montana and pretty much ended the game. Morris was also sacked three times. There were no explosive plays and almost no long throws. Maybe Morris is the best QB the Huskies have. If so, we're in big trouble.

It looked like the Huskies were the FCS team, not a ranked FBS team.

Going into this game, one sports pundit called it a "glorified scrimmage." But you don't lose those.

Next week the Huskies travel to take on Michigan in front of  approximately 100,000 screaming fans. If the team does not improve greatly in the time before then, they are going to get their asses handed to them. That game is on ABC at 5pm PDT.