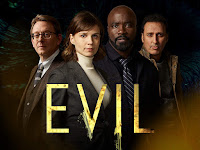 The show involves a former Catholic (now atheist) female psychologist who is hired by the Catholic Church to investigate possessions and other supernatural events. She works with a Catholic priest in training (played by Mike Coulter of Luke Cage fame and an actor I really like) and a technical guy who is Muslim. An interesting group.

The show wraps Catholicism into its plots often.

Now I say I don't do horror because I don't. But Evil is horror-lite. The psychologist has four young daughters and the only time I really get scared is when the story line involves them. There's another psychologist who is the bad guy named Leland Townsend. He's shown doing evil things and the plot thickens when he starts dating the female psychologist's mother.

I recommend Evil if you can handle the...  evil. It is very well done and just scary enough to make it interesting. I'm about to start on season two.