Bullets Go as Far as They Want 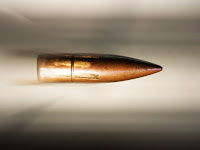 I was watching The Fifth Element on television the other day for the nth time. I came in toward the end. And Gary Oldman's character, Zorg, is shooting upward with an automatic weapon into the ceiling of the hotel room at Leeloo who is hiding in the duct work. And I thought, for the first time, anyone in the room above them is going to have bullets coming up through their floor. But, of course, this isn't shown because the filmmakers likely didn't think of it. While there were bullet holes in the bottom of the duct work, there were none put in the top.

In the real world, bullets go where they want to go and as far as they want to go. One of the four rules* for safe gun handling is "Know your target, what's in front of it and what's behind it." That's because it might miss your target and hit something (someone) behind it, or your bullet might pass through the target and hit something (someone) behind it. In Hollywood movies and television productions, this rarely happens. Hollywood has trained us to think bullets only go as far as we want them to. Which just isn't true. A bullet will travel (sometimes miles for rifles) until it hits something that stops it.

Oh, and guns don't make a cocking sound when you draw them. I'll never get tired of pointing that out.

*The four rules of safe gun handling are:

Hollywood does an awful job on number four, too.
Does Hollywood gun handling drive you nuts, too. Let me know in the comments below.
Posted by S. Evan Townsend at 6:00 AM