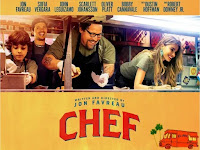 I recently watched the movie Chef. It was made in 2014 and somehow flew under my radar for good movies. It was produced, written, and directed by Jon Favreau. He also played the lead role, the chef.

The film is about a chef who gets a bad restaurant review mostly because his boss, played by Dustin Hoffman, wouldn't let him change the menu from what's popular to what's best. When his young son hooks him up with Twitter, things get worse as he doesn't understand the difference between a reply and a DM. Then he explodes at the critic in public and, of course, someone records it and it goes viral. Then he gets fired/quits.

Favreau pulls in a few of his MCU actors to help out including Scarlett Johansson and Robert Downey Jr.

But the best part of this movie is his relationship with his young son who helps him back on the road to redemption, including renewing his relationship with his son, which at the beginning of the movie was strained (the chef is divorced and gets visitation on weekends). The boy is a bit too precocious with social media and social media is a little too successful at helping the chef's new venture: a food truck. But it still works.

The movie is a bit food porny. Just watching Favreau's character make a grilled cheese sandwich will make you drool.

I recommend watching Chef for a feel-good movie. It starts a little slow and heavy, but gets better as it goes. It's rated R for language and some discussions about sex, and otherwise would have made a good family film. If you haven't seen it, check it out.