The Speculative Fiction Cantina with Chayil Champion and Loren Molloy

Today on the Speculative Fiction Cantina we are pleased to welcome Chayil Champion and Loren Molloy.

Chayil Champion is a graduate of the University of Miami in Coral Gables, Florida where he double-majored in both English and Journalism while competing as a two-sport athlete in both football and track. After graduating from UM in 1998, Champion received his masters and doctorate degrees in education from Nova Southeastern University in Fort Lauderdale, Florida. He embarked on a career in education as an English teacher and vice principal in South Florida’s Dade County and West Palm Beach County public school systems respectively before moving to Los Angeles, California in 2009.

A native from Evanston, Illinois, a suburb that borders Chicago’s north side, Champion developed a love for writing at a young age which carried well into his adult years. After penning his first book in 2009 upon his arrival to Los Angeles, Champion has gone on to write five more books, which include the Young Adult fiction novels, Affiliated and Going Pro, both from The Lost Souls literary series. Champion also wrote Exiting The Wilderness and But He Said He Was A Christian, two nonfiction Christian self-help books. Majesties of Canaan: The Goliath Project is a Young Adult, super hero novel. It is the first book of many within the Majesties of Canaan Superhero Series and the second book of The Dark Spores Series where Champion has partnered with best-selling authors Keshawn Dodds and Braxton Cosby to form the new superhero universe and to collaboratively pen the upcoming superhero novel Infinity 7 due in early 2017.

Outside of his love for writing, Champion, runs his own education consulting company in Los Angeles where he continues to teach and tutor students. In his free time, Champion focuses on fitness as he is a gym rat, frequents movies, and enjoys spending time with his daughter Vanessa.

Majesties of Canaan: The Goliath Project

Loren Molloy won her first award in 2005 for Best Young Poet. This was the catalyst to the creation of her first published book Black Dreams and Shattered Illusions. Loren has been writing books ever since.  When Loren isn't writing or researching for her next novel she spends time watching Horror movies, walking outdoors in her beautiful home state of New York, and interacting with others through her social media accounts. 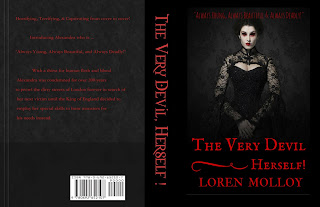 The Very Devil, Herself

Where did all the Dragons Go

From Today's Program: Chemists Know When You're Scared