Sunday I was gone from Noon until just after 10:00 P.M. This is because I drove to Seattle and back. One son (who doesn't drive) was returning to college and another was flying out of SeaTac and wanted to be dropped off. Which is normally no big deal. I run to Seattle and come back all the time.

Except the weather chose this particular Sunday to turn to crap.

Going westbound (toward Seattle), it wasn't bad for the first, oh, 100 miles. But then it started snowing hard and soon the road was covered in snow, slush, and ice, and everyone else was going stupidly slow. On Snoqualmie Pass,  the State Patrol, always over-cautious, was requiring chains on vehicles without all wheel drive and had the speed limit down to 35 mph. But I had all wheel drive and snow tires so I had no problems (and didn't have to put on chains). But people were driving as slow as 20 to 25 mph. What would happen is someone going 21 mph would be passing someone going 20

mph and take forever to do it.

Another interesting phenomena was that in places where the road was three or four lanes wide, people were still driving in only two rutted out paths. At one point I jumped into an unused (and unrutted) lane and blazed my own trail, passing several slow cars and loving my all wheel drive and Blizzak snow tires.

Finally we got down the west side of the Cascade Mountains were it was "only" raining. I actually managed to put the cruise control back on until we got into traffic around the Seattle suburbs. But what normally takes about two hours (our house to the Starbucks in North Bend where we often stop for a bathroom break) took three hours (and I really needed to go!).

We took my son's stuff into his apartment (well, I didn't, I was on the phone) and then took him food shopping. Then we went to a Korean restaurant for dinner. I was encouraged to see that it was full of Koreans. The food was good but it was a bit expensive and the portions small. And lately it seems Korean restaurants have calmed down their kimchee. It wasn't very spicy and I like spicy kimchee.

But, for the first time, ever, I had trouble with chopsticks. My hand would cramp up and then I couldn't control them. I finally resorted to a fork, embarrassed that I had to do so.

We took the college son back to his apartment, dropped the other son off at the airport, and headed back over the mountains going east. I stopped in North Bend and filled the car with gas because I wanted a full tank in case we had problems on the pass.

By the time we reached the pass, it was "mixed rain and sleet" but as we progressed, the rain turned to freezing rain. Freezing lane on snow is a heck of a lot better then freezing rain on pavement. On snow it'll get broken up with each passing car. The biggest problem was that at the edges of the road were deep slush banks. If you got into them, they were likely to pull you off the road. And we did see a lot of cars off the road probably for that reason. 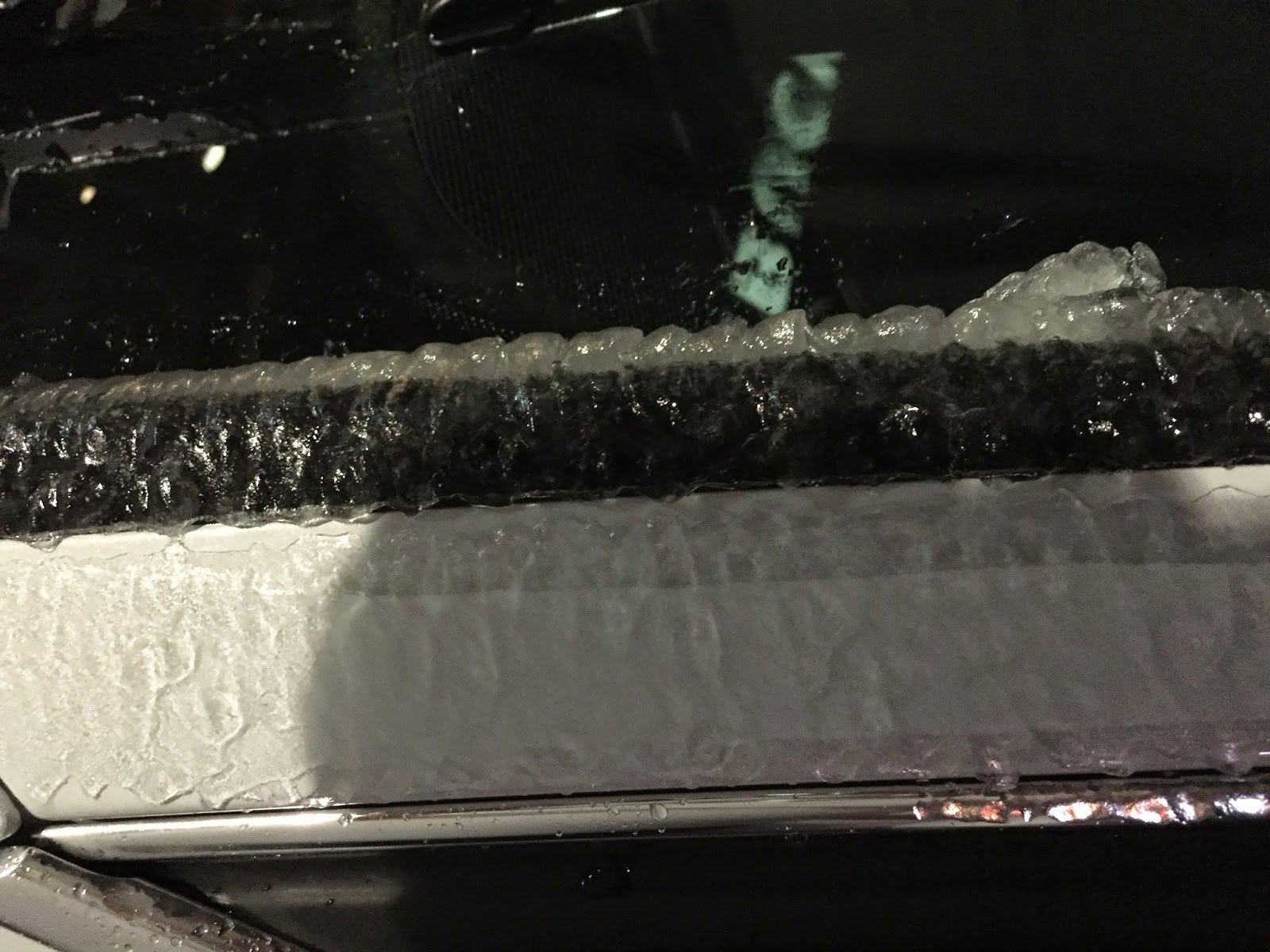 We stopped in Ellensburg to get something to drink and go to the bathroom. I also wanted to clear the windshield wipers which were caked with ice and nearly useless. There was, I would estimate, about an 1/8th inch of ice on the frontal areas of the car. The windshield stayed mostly clear because I had the defroster going full blast most of the time. To the right is a picture of how much ice there was on the windshield frame (A pillar).

We escaped Ellensburg just before the "sleet" (read: freezing rain) started. The rest of the trip we had bare and wet roads. I was nervous about black ice or a sudden ice spot so I never turned on the cruise control and kept my speed below 70 most of the time (my right foot is a rebel and I did catch myself at 78 a couple of times).

We finally got home about 10, four hours after leaving SeaTac. That is normally about a 2.5 hour drive.
Posted by S. Evan Townsend at 8:00 AM