Yes, I normally review movies quite a while after they come out because I watch most movies on Blu-ray or DVD from Netflix which means I have to wait until the DVD/Blu-ray to come out then often four weeks after that because Netflix doesn't release some new releases for four weeks after you can buy them because of a deal they made with movie studios to get streaming content.  Yes, it's very annoying.

But here I am about to review a movie from 2008: Australia.   For those of you math-challenged, that's five years old.

I put it at the bottom of my queue figuring it would be safely down there for months.

But, Netflix is being kind of weird lately (ever since, it seems, I sent back a non-working disc of Oblivion and demanded they send me a new one).  I have two movies released in 1999 and 2000, respectively, both on "long wait."  I had four released movies in my queue ahead of Australia and they sent me . . . Australia.  So I invited my mother over to watch it and we watched the 2 hour, 45 minute movie.

I think what happened is a bunch of Australian actors and producers and maybe even the director thought "hey, let's make a movie about the grand history of our country."  But what they forgot was: compelling characters and a plot that wasn't lifted from old John Wayne movies.  What we ended up with was a predictable plot, gross clichés (oh, aren't the native folk so much smarter and honorable than the white people), and cheesy special effects.  There was even about two minutes of film clipped right out of the 38-year-old movie Tora! Tora! Tora! before the Japanese attack on Darwin.

Yes, the scenery was often spectacular (looked a lot like southern Utah to me) and yes, the actors did what they could with the material they were given (oh, Nicole Kidman, you tried so hard, you did.)

(Speaking of Nicole Kidman, remember when she looked like this: 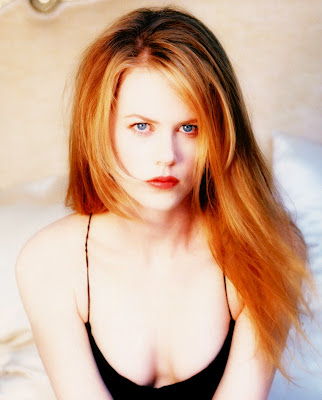 What happened? Did she have a botched facelift?)

What you had with Australia was a movie trying so hard to be epic, it was mediocre.  Yes, Australia is an amazing country with a rich history and fascinating aboriginal culture.  But this movie seemed to just gloss over all that in favor of spectacle and barely-believable romance salted with Hollywood clichés.  Not how I want to spend 2 hours and 45 minutes.