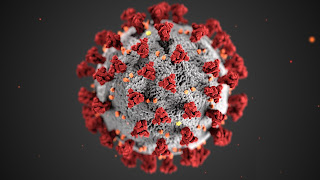 After two and a half years of the pandemic, I finally tested positive for COVID. I suspect I caught it on July 7th or 8th. I started feeling symptoms on the 12th. I did a COVID test on the 13th and it came back positive. I have no idea where or how I caught it. Interestingly, my wife didn't have it when I did. We think she caught it from me.

I've had both COVID shots and one booster. At my age, I'm eligible for two boosters, but I never got the second one. My symptoms were mild-ish. The first few days I coughed so much my ribs and diaphragm hurt. My nose ran constantly and I was taking DayQuil Extreme to control symptoms. That helped, I suppose. The fatigue was what I hated. I only had energy to sleep or watch TV. And I slept a lot. I got behind on my reading because I didn't have the energy to do so.

But, on the evening of Monday the 18th my breathing was very labored and my nail beds were turning blueish. I sign of too little oxygen. So I went to the ER. I was there about eight hours, leaving a little before 1AM. At first they were talking about admitting me for a day or two. Which I really didn't want. But then they said if my blood oxygen saturation stayed over 90% with no added oxygen, I could go home. It did.

They gave me an X-ray and a CAT scan. The nurse said all that showed up was COVID. So they shot me with a steroid to reduce inflammation. The problem with steroids is that I'm bipolar. And steroids make me (and every other bipolar person, I assume) manic. They said they gave me a small dose but I still got very silly and was singing in the halls as they wheeled me off to the CAT scan.

They also gave me a monoclonal anti-viral agent that the FDA has "emergency" approved. I don't know if it helped or not. But I did start feeling a little better. But I might have gotten better anyway.

The hardest part was the "self-isolation." I didn't leave the house for nearly two weeks except for that ER trip.

So now, after nearly three weeks, I'm feeling better and I'm back among the living.

Have you had COVID? How was your experience? Let me know in the comments below.