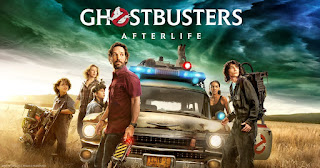 DVD.com deigned to send me Ghostbusters: Afterlife as soon as they released it. I guess I'm not being throttled right now. (Although this week they sent me the #11 and #12 movies in my queue.)

I was a little cautious approaching this movie. I don't like horror and the ads and trailers I saw indicated it was more horror than comedy, unlike the original Ghostbusters.

And there is more serious content than the original movie, but it does have funny moments, too. It's much less serious than the ads and trailers I saw indicated. I enjoyed it but I didn't love it.

The story involves a family with an older kid played by Finn Wolfhard (of Stranger Things fame)(and where the hell is Stanger Things season four?) and a precocious twelve-year-old girl, Phoebe. They get kicked out of their house for not paying rent but, luckily, inherit the mother's father's farm in Oklahoma. That's where things get interesting. Phoebe, being the curious type, starts discovering things, clue that lead to her and her mother learning about their heritage and a threat to all of humanity. I'm trying to avoid spoilers  here.

It was well do. Using kids instead of adults made it more fun. Paul Rudd plays a bored science teacher who, at summer school, shows the kids horror movies (I would have been traumatized). I recommend Ghostbusters: Afterlife, especially if you liked the original movie (and who didn't?).

Did you watch Ghostbusters: Afterlife? Did you like it? Let me know in the comments below.