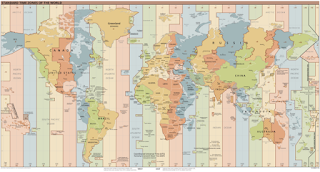 When I was in the military, we were very concerned with time zones because our intelligence came from all over the world. The Department of Defense assigned a letter to each time zone (at least the major ones) and UTC was "Z" or "zulu." (Most people call "UTC" "Greenwich Mean Time" but that's not its official name. It's actually "Coordinated Universal Time." So why "UTC"? That's explained here.)

There are only 26 letters in the alphabet and there are, if I counted correctly, 34 times zones. Most are off by an hour from their neighbors but some are off by half an hour and at least one is off by fifteen/forty-five minutes.

I live in the Pacific Time Zone of the US which is eight hours behind of UTC (UTC -8) except during daylight saving time with it's seven hours behind (UTC -7).

The earliest time zone is UTC +14. That's Christmas Island in the Pacific Ocean. You'd think it'd be UTC +12 but it's 14 for some reason. I believe it's on the east side of the International Date Line.

The latest time zone is UTC -11. Again, why not -12? I don't know. That's for the island, Nuie, also in the Pacific Ocean. Probably also near the International Date Line

There are some weird time zones. For example, there is an Australian time zone that is UTC +8.75. There are a lot of time zones that are a half hour off everyone else. For example two in Australia (Australia has six time zones if I counted correctly), parts of India, at least parts of Afghanistan, and Iran, and Newfoundland and Labrador in Canada.

There is a border you can walk across and get jet lag because the time zones are 4.5 hours apart (that's China and Afghanistan)(Assuming you could walk across that border). China has one time zone for the entire country, which must be convenient in some way yet weird in the western parts of the country.

Do you have to deal with time zones? Or are they just boring to you? Or do they confuse you? Let me know in the comments below.