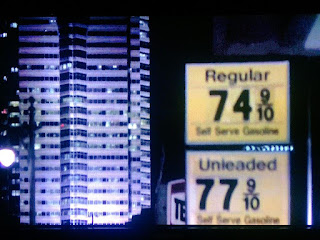 During the recent holiday season, I watched Die Hard, as I usually do.  There's on scene in the movie I found very disturbing. It's pictured at left. It's the gas prices shown that is disturbing.

Now you can't get "Regular" anymore, because all gasolines have gone to unleaded. Today's "regular" is just lower octane unleaded. So I was curious, how much is 77 cents in today's inflation adjusted dollars. I used this inflation calculator and found out that it's $1.81. (Die Hard was made in 1988).

However, gas prices now are a lot more than $1.81. So I decided to see how gas prices have changed since 1988. I went to the Department of Energy website and it lists average gasoline prices historically, but only starting in April of 1993. So I started then. And then I adjusted them for inflation using data from this website. And I made a pretty graph of the data: 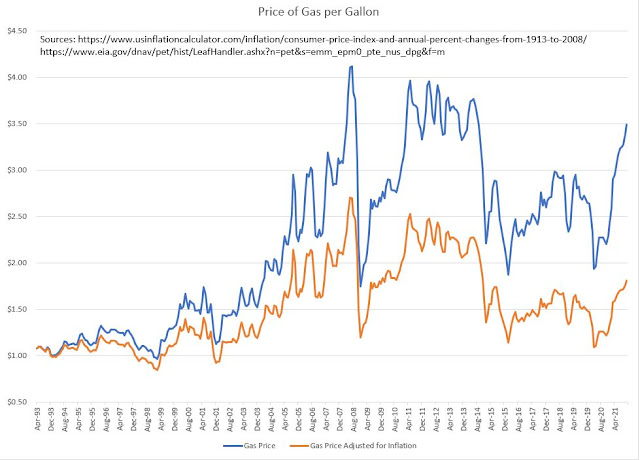 If you adjust the price of gasoline since April 1993 for inflation, that's the lower line. And the last number on that line (November of 2021) is exactly $1.81, which surprised me. But California has always had expensive gas. I'm not sure why except these days it has the highest gas taxes.

But gas goes up and down with the worldwide price of oil. And the price of oil went down during the first part of the pandemic because demand dropped so much. Then after the lock downs slowed, it shot up partly due to increased demand, partly due to the world oil market.

Also, I think gas is more expensive than in April of 1993 because of ethanol mandates and gas taxes.

So this was an interesting experiment.