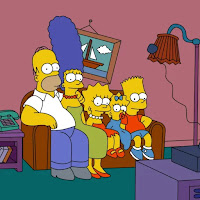 I recently finished watching the first ten seasons of The Simpsons on Disney+. My goal starting out was twenty seasons, but I'm not going to make it. The tenth season was hard enough to slog through (except there was one joke in the second-to-last episode of the tenth season that almost literally had me rolling on the floor).  And I have already seen most if not all of my favorite episodes such as "Last Exit to Springfield," "Duffless," and "Deep Space Homer."
One thing I didn't like was that Disney+ showed the episodes widescreen when they were originally 4:3. That sometimes cut off important parts of the visuals (such as in "Duffless.") See details here.
Also, the third season episode, "Stark Raving Dad" isn't on Disney+, perhaps because of its Michael Jackson connection (Jackson voiced a character who things he's Michael Jackson). Apparently you have to buy the complete third season on DVD to see it these day.

I watched normally two episodes a day. Sometimes on the weekend I'd watch more.

Watching the series so fast, you can almost feel the quality degrading as the years pass. The early seasons (after the short season one) seemed to be the best, and it went downhill from there but with occasional brilliant episodes.

I also watched the seventeenth season episode "Girls Just Want to Have Sums" as it was, I believe, the last truly brilliant episode.

I watched The Simpsons in first run for thirty years. But then I gave up on it. I see it still is running but I'm not watching (I gave up on Family Guy, too).

Now I'm going to have to find something new to watch. Not sure what. Maybe catch up on The Expanse.