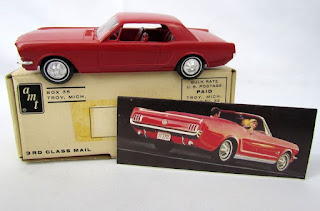 My first car was a candy apple red 1965 Ford Mustang. It was plastic. But it was, I could tell even at my young age, high quality plastic. It might have looked a lot like the one in the picture.

I've had a lot of cars such as it over the years. Lots of Hot Wheels. I had a blue Jeep pickup that I still have. I don't know what happened to the white horse trailer or the horses that came with it.

I also built a lot of cars out of Legos. S. Evan Townsend original designs. I tended to put jet engines (red Legos) on them.

But toys were my first introduction to cars. And, if you've read this blog, you know I like cars. I totally understand why Jay Leno owns so many cars (286 according to Google). There are so many cool cars with different personalities and different capabilities. If I were rich enough, I would have 286 cars, probably.

At one time I owned seven cars (long story). Now I own only two. And of those seven cars, only four were cool, the rest were my son's cars and I didn't buy them "cool" cars.

How do you feel about cars? Did you have any cool toy cars as a kid? Let me know in the comments below.
Posted by S. Evan Townsend at 6:00 AM