The Huskies have a Bye

The University of Washington Huskies have a bye this weekend. That means they don't play. This will be a chance for their running back squad to heal up and take some pressure off of Salvon Ahmed.

It's also an excuse to look at the rest of the season.

Right now the Huskies are 5-3 overall (2-3 in conference). They need six wins to be bowl eligible. The more wins they have, the better bowl they'll go to. So what does the rest of the season look like?

Next week, on November 2nd, we play Utah. The Utes are 3-1 in conference and 6-1 overall. They are tied for first place in the Pac-12 South with USC (3-1 in conference, 4-3 overall). We play Utah at home but they are still going to be a tough team to beat. Sort of like the Ducks.

Then on Friday, November 8th, we play the Oregon State Beavers. The Beavers are having one of their best years and are 2-2 in conference (3-4 overall). This is an away game for the Huskies but I think we can easily win this one.

On November 16th, the Huskies have their second bye of the season.

The Huskies travel to Boulder, Colorado on November 23rd to take on the Colorado Buffaloes. The Buffs are 1-3 in conference play (3-4 overall) so I don't think, even on their home turf, the Huskies will have much of a problem. But I said that about California. The Buffs are currently in last place in the Pac-12 South.

Then, on Friday November 29th (the day after Thanksgiving) the Huskies host the Washington State 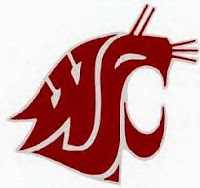 Cougars for the Apple Cup. The Cougars are in last place in the Pac-12 North with a 1-3 record (they beat the Buffaloes last week). Obviously, last season's success for the Cougars was mostly if not all quarterback Garner Minchew. But, it's the Apple Cup and anything can happen. It'll help that it will be held in Husky Stadium. And Husky coach Chris Petersen has never lost an Apple Cup.

So where does that leave us. Worst case (lose to Utah, lose to Washington State) would make us 7-5. Best case we "win out" will make us 9-3. Likely case, we lost to Utah and then win the rest for 8-4.

Then we see how next year looks. Rumor has it that Husky quarterback Jacob Eason is going to go into the draft despite being a junior. So we'll be on the lookout for yet another QB.

But let's get through this season, first.
Posted by S. Evan Townsend at 11:31 AM