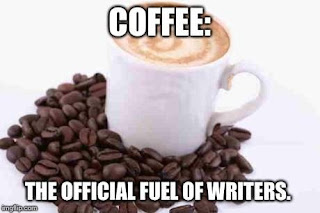 I'm not like that. I drink, usually, one triple mocha a day (in the summer, I don't even drink that because I don't like hot drinks in the heat). I remember years ago I was told I was allergic to caffeine (at the time I would consume 4-6 cans of Diet Coke a day). So I had to give it up. I was worried this would interfere with my creativity. Ten published books later, and I'm not worried any more. Except that I started drinking caffeine again, in reasonable quantities.

What is your relationship with coffee or caffeine? And do you think it helps you be creative? Let me know in the comments below.
Posted by S. Evan Townsend at 6:00 AM