Speed Limits Can be Dangerous

Ask any budget director for any government jurisdiction (except the federal government) and they will likely tell you that fines and penalties are a major part of their revenue stream. And most of those fines and penalties come from traffic tickets. And a lot of those, perhaps a majority, are speeding tickets.

I am convinced that most speed limits are set not for safety, but for maximizing revenue.

But, you might be saying, if you post a speed limit of 35, people will go 40 mph or even 50 mph. That's true, to a point. But the reason is likely the road is safe at 50 mph and the speed limit was set to maximize revenue. Most people drive at a speed they feel comfortable at, and pay scant attention to the actual speed limit. People aren't suicidal. They drive what they think is safe yet comfortable.

I remember when I drove in Idaho with its 80 mph speed limit on rural interstates. And while I was doing 85 (as I tend to go 5 mph over any speed limit as long as conditions permit) a lot of people weren't even going the speed limit. They weren't comfortable at 80.

Washington State was considering raising the speed limit on part of I-90 from 70 to 75. I went to a public hearing to speak in favor of it. One older woman got up and said she was against it because 70 mph is too fast for her. And I was in a Facebook discussion of speed limits and one person said (and I paraphrase from memory) "A mile per minute is fast enough." That's 60 mph.

I am old enough to remember (and have driven) back when the National Maximum Speed Limit (NMSL) was 55 mph. The problem with that was that governments learned they could make money off of low speed limits. And so did insurance companies so they still lobby for lower speed limits. Why do they make money? Because they raise your rates if you get a speeding ticket. Think about that. Say a road had a speed limit of 70 mph. Then the NMSL went into effect dropping the speed limit to 55 mph. Someone going 65 mph might get a ticket for going 5 mph slower than the old speed limit.

Now if the speed limit were raise to, say 100 mph, there would be very few tickets handed out because most people wouldn't drive that fast. Even I may not drive that fast (or 105 mph). Or I might. I was driving in Poland years ago and I was doing 100 mph on the mostly empty road and I got passed by a white BMW with German plates.

Some people think the faster you go, the more you're risking death or injury. If you crash going 100 mph, you're probably dead. But you first have to crash. A study showed that the further you deviate from the average speed (which may not be the speed limit) the more likely the crash. But the interesting thing, shown in the chart below, is it's more dangerous to go slow than to go fast. 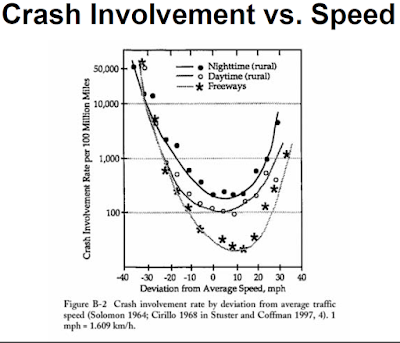 So what's my point? If speed limits weren't a major revenue stream for governments, we might have speed limits based on reality. Roads would be safer and speed limits would likely be higher.
Posted by S. Evan Townsend at 6:00 AM