The Speculative Fiction Cantina with Clyde Riddlesbrood and Chris Gerrib

Today on the Speculative Fiction Cantina we are pleased to welcome writers Clyde Riddlesbrood and Chris Gerrib.

I grew up in the entertainment industry working with my father at a Dinner Theater in South Jersey and started my own theater company in 2000.  I have personally been in over 5000 shows in my lifetime and as a company we have performed over 1500 shows.  Currently Riddlesbrood is one of the most successful and vibrant theater companies in the New York, New Jersey area performing more than 150 murder mysteries and dinner theater shows per year at multiple locations.  In addition to this, we produce 3 large Broadway style shows for “Arts on the MOVE” Performing Arts Program for children and teens. 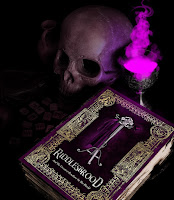 The Greatest Brochure in the World

Chris Gerrib admits to being a bit obsessed with Mars, but in a healthy way – all three books of his Pirate Series are set on Mars.  Chris still has a day job as the IT director at a Chicago-area bank, and holds degrees in history and business from the University of Illinois and Southern Illinois University.  He also served in the US Navy during the First Gulf War, and can proudly report that not one Iraqi MiG bombed Jacksonville, Florida while he was in the service.  In his copious free time, Chris is a past President of and currently active in his local Rotary club.

From Today's Program: Brain/computer Interfaces May be Closer than You Think