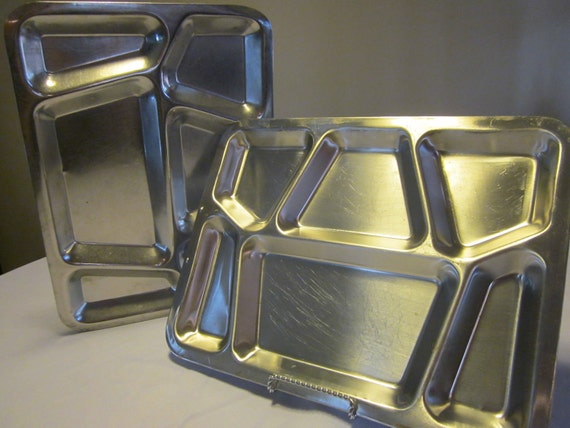 When I was in first grade, sixth grade, and middle school (called "junior high" back then), I often ate the school lunches. (In second through fifth grade I lived close enough to home that I would walk or ride my bike home for lunch. The same with high school.)

We ate on metal trays like the ones pictured at left.

Because I liked (and still do) vegetables, I would use that to my advantage. You couldn't go back for seconds unless you ate everything. And a lot of kids didn't like vegetables (especially spinach) so I'd offer to eat their vegetables for them so they could go back. But I demanded their dessert in exchange. So I got more vegetables that I liked, plus more dessert. It was great.

There are vegetables I won't eat, such as lima beans and brussel sprouts but they never served those at school, to my memory.

The biggest difference was green beans. At school they were heavenly. At home, they were pedestrian. Even if you added salt they just didn't have that wonderful canned flavor.

Sometimes I miss those school lunches. But most of the time, I don't.
Posted by S. Evan Townsend at 12:38 PM