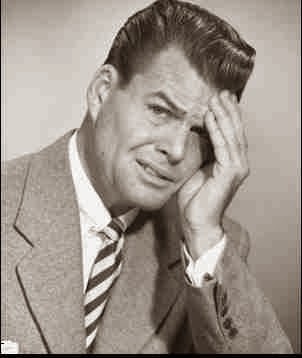 I once had writer's block for two years.

Now, admittedly I was working more than full time, I was busy with other stuff so I wasn't staring at a blinking cursor for two years.  But I could not finish Hammer of Thor, my first Adept Series book for two stinking years.  I had written almost up to the climax and could not force myself to write more.  I had the climax sort of planned out (as much as I plan out any writing in advance) but could not bring myself to write it.  For two long years.

Then one day it suddenly occurred to me: my plans sucked.  I realized I had plotted out a climax that was pretty anticlimactic.  My main character, who had just spent over 100,000 words getting to this place, was going to sit back and watch it happen.  I needed to get him into the action.  And when I got that figured out, I wrote the climax and denouement in a about a week of spare time (I was still working at my day job).

However, I think a great deal of writer's block is caused by our fear that what we are about to write will suck.  We let the perfect be the enemy of the good.  I've said over and over on this blog: your first draft will suck, get over it and write the damn thing.  Then you can fix it in edits but you can't fix it in edits if you don't write it.

I have two methods of overcoming writer's block.  One is: just keep writing.  It might suck, but at least you're writing.  And if it does suck, fix it in edits (you do edit, don't you?).

The other method is to stop writing.  This is different from writers block.  Writer's block is when you don't write when you want to.  If you stop writing, you just stop because you don't want to write.  What good does that do?  It frees the mind from the pressure of producing.  It lets your mind wander and think about other stuff other than YOU'RE NOT WRITING.  And often this will after a short time, produce an idea that will get me past the writer's block (okay, two years was not a short time).

Last week suffering a bit from writer's block.  I am about half-way through a novel and I suddenly had no idea where to take it from where it was at.  So I stopped writing and let my thoughts wander and didn't think about it and didn't worry about it.  As I was driving on Friday on a 360-mile round trip, I had an idea.  This got me thinking.  Then I went to my writers' group Friday night.  It was a "writing writers' group" where you are expected to produce.  I sat there staring at the cursor not getting anywhere.  So I backed up a few pages and read what I'd written right up until I got stuck.  And I had an idea that built upon the idea I had while driving.  If I changed the villain from who it seem to be to a minor character, that would be a great plot twist, would solve so many problems I was having with the plot, and would let me continue.  I wrote down some notes on my thoughts so I could do a little thinking about where the plot should go from here (and I need to do a bit of research).  But I no longer feel as if I have writers block because I used both methods: I backed off from the writing, and then I was in a situation where I was forced to write.

The same thing happened in God of Strife, the fourth Adept Series novel coming out May 15th.  I was about half-way through it when I realized my planned plot for the rest of the novel was weak.  So I took a break, and a few days later had the idea that went on to complete the novel.

The more you worry about that fact you're not writing, the more you'll not write.  So either write and admit it might be crap that you need to fix later, or stop writing, stop worrying, and let the ideas flow.  One or the other method (or a combination of the two) should let you overcome writer's block.
Posted by S. Evan Townsend at 5:00 AM