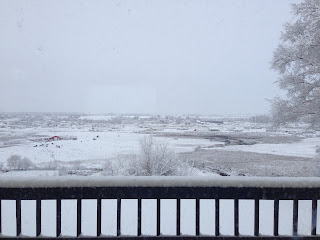 I was kind of disappointed up until now.  We'd had a little snow but it would melt right away and just make the world soggy.  But this is genuine, stay on the ground, snow.  And stay on the roads, but that can't be helped.

The usual pattern here in Central Washington is for it so snow, melt, snow, melt snow, last a little while, melt, so on and so forth until spring.  It's rare we have snow all winter.  This year looks no different.  But at least we had a white Christmas.

(Did you know the song, "White Christmas," was written by a Jewish Russian immigrant to the U.S.?  How's that for diversity and tolerance?)
Posted by S. Evan Townsend at 11:13 AM