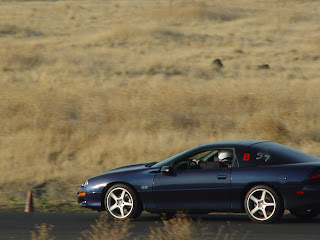 Not exactly what I would call a relaxing weekend.  Years ago I promised my son when he was 18 he could go the the high performance driving school (driving on a racetrack) that I let his older brother go to and that I attended many, many times.

I decided not to drive this time so I ended up sitting outside in the sunshine (not something fair-skinned redheads should do a lot) while my son drove on (and twice off) the track.  Because of his second departure from the track today, the car is filthy inside and out.  I said we looked like a couple of rednecks who drove their Camaro off the farm.

So I'm tired.  Just thought I'd let you know.  But boy, I heard the roar of the engines, smelled the hot brakes, felt the ground-thumping of massive power being applied, and I so wanted to be out on that track.

So now I'm tired, and sunscreen is getting into my eyes, and I just want to rest.  How was your weekend?
Posted by S. Evan Townsend at 5:52 PM