QR Codes are Back!

For a while there, I thought QR codes were dead. But they are back. I'm seeing them in all sorts of places. Restaurants, TV commercials and shows, signs. And I blame the pandemic.
Restaurants, once there were allowed to open, needed a way to show you their menu without you touching their menus. So they used QR codes: 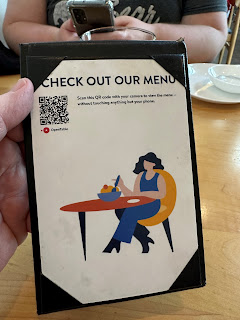 (That was in a restaurant last September still.) And I think people suddenly were reminded of their usefulness.
Here's one I saw on television during a football game: 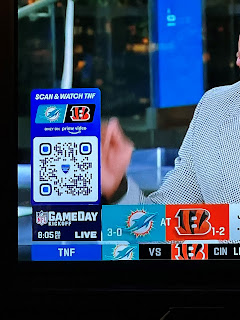 I saw one on the desk in a hotel room. So I scanned it. It brought up the room service menu!
According to Wikipedia, QR stands for "quick response" and the QR codes were invented in 1994 by a Japanese automotive company (that I've never heard of) called Denso Wave. I didn't realize they'd been around that long. In 1994 I just learned the existence of email.
It's interesting how they pretty much died out and then made a comeback during the pandemic.
Have you seen the increased use of QR codes, or do you think I'm crazy. Let me know in the comments below.