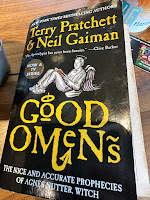 I was looking for a new book to read (after re-reading The Moon is a Harsh Mistress by Robert Heinlein) and a friend recommended Good Omens by Terry Pratchett and Neil Gaiman (the complete title is Good Omens: The Nice and Accurate Prophecies of Agnes Nutter, Witch).

The book is a fantasy set in the '80s (at least before cars had CD players). It is often laugh-out-loud funny at first, but then it settles into simply being amusing. As a writer, I know it's tough to maintain humor for a whole manuscript. It's set in England and some of the terminology is different than the US. For example, a telephone answering machine is called an "ansaphone."

The story is that the forces of good and evil are about to clash for the end of the world battle (Armageddon). But first, the baby antiChrist needs to be brought to Earth. But then there's a mixup at the hospital and the antiChrist is... misplaced. And somehow an angel and a demon (who are unlikely friends) never figure it out.

I usually do my reading at Starbucks and I had at least five people come up to me and tell me this is their favorite book. It's a good book, but I don't see that it's worth being one's favorite. It's an amusing and fun read. I would recommend it easily. Maybe it was the buildup my friend gave it, but I was actually a bit let down by the whole thing. There was clever writing and clever takes on the whole end-of-the-world that the Bible predicts. For example, the Four Horsemen of the Apocalypses ride motorcycles, not horses, and War is a woman.

So, yes, read this book. It's amusing.

Have you read Good Omens? What did you think of it. Let me know in the comments below.