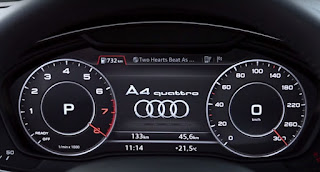 My current car has what I guess could be called a hybrid instrument panel. There is a real tachometer and a real speedometer and between them is a digital display that can show various information. I like this set up. It is classic and it's useful. And it doesn't look cheap.

Maybe digital instrument panels are expensive. I don't know. So maybe that's why car makers think they are cool. And, yes, they are much more versatile than fixed dials. But no matter how expensive they are, they look cheap to me.

But I'm probably stuck with digital "video game" panels because that's what automakers are moving toward. Maybe I don't want to buy a new car soon.

How do you feel about digital instrument panels. Am I making a big deal out of nothing. Let me know in the comments below.