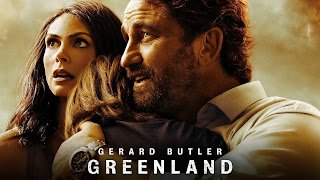 In the movie, a comet named "Clarke" is heading for Earth and is calculated to crash into the planet. Some folks, including the movie's heroes, are selected to be taken to a shelter in Greenland where they should be safe. But things don't go as planned and the movie is exciting and well made. I literally jumped with surprise at one point. The movie tugs at your heartstrings and keeps the tension high. It was a pretty good film.

Except the science of it stinks.

Clarke is supposed to be in fragments, which is certainly plausible. The first fragment hits Tampa in the afternoon of the first day. As the movie progresses through the next night, the next day, through that night, more fragments hit. And a "planet killer" sized chunk is supposed to hit on the morning of the third day. I estimate it's about 40 hours from the first fragment hitting until the planet killer hits.

Now the Earth spins around its axis so more fragments hit in various parts of the world. But, Earth also orbits the sun, as does the comet (in a parabolic orbit, based on the movie's descriptions of it coming from "another solar system"). In 40 hours from the first hit to the last, Earth would have moved 2.68 million miles in its orbit. The comet would be in its orbit which might move slightly toward the Earth due to Earth's gravity, but likely not over two million miles. In reality, the "planet killer" and most of the other fragments would have simply flown by the Earth in their orbit.

What about Earth's gravity? Well, asteroids pass by the Earth much closer then 2 million miles and a lot slower than a comet, and they don't get sucked into Earth gravity. They likely change course but they don't hit the planet.

The movie is still worth watching. It's not at bad as Armageddon for science errors. But then again, I don't think anything could be.

Did you watch Greenland? What did you think. Let me know in the comments below.

Email ThisBlogThis!Share to TwitterShare to FacebookShare to Pinterest
Labels: movies and television, science