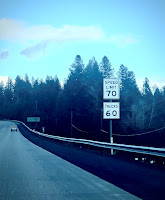 I drive a lot of interstate highways. If I go to Seattle or Spokane, it's all interstate. If I go see my grandson, it's mostly interstate.

One thing I have noticed is that lately, drivers seem to speed...a lot. I set the cruise control at 5 mph over the speed limit because if I go faster for any extended period of time, I get a ticket. On the interstates in Washington State, the speed limit is 70 mph for cars, so I go 75. But lately, it seems, people are going 80 or 85 on the interstates. I'm passed constantly by people zooming by. And I'm not sure why. I'm not seeing fewer cops.

A while back, Google bought Waze. And if you put a route in Google Maps, it, like Waze, shows you where people have reported cops being. I wonder if people are trusting Google Maps and speeding where they don't think there are cops. Me, I don't trust it enough to do that. It has shown me a few times where there are cops, but not always.