Get Rid of the Penny 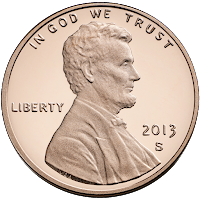 A while back I explained how to measure the tread depth on your tires with a penny.

But, basically, measuring tread depth is all the penny is good for. Pennies are pretty much useless and I wish the U.S. would get rid of them. Canada already did. Pennies basically exist to A) pay sales tax and B) keep the zinc lobby happy (pennies are made of zinc, these days). But it costs more than a penny to make a penny. They are so worthless I've seen people literally throw them on the ground. I'm, personally, too cheap to do that.

We've gotten rid of coins before. In 1857 we stopped making/using the half-cent coin. But here's the kicker: the half-cent coin in 1857 was worth more than the dime is now. So we could get rid of the penny and the nickle.

What they do in Canada, according to my Canadian friend, is round up to the nearest nickle unless you're paying by credit card. We could do this in the U.S. It would save money and hassle and time. Besides, eventually cash will be as obsolete as an Apple II computer.

So, get rid of the penny, please.

Agree? Disagree? Think I'm nuts? Let me know in the comments below.
Posted by S. Evan Townsend at 6:00 AM